Book Review: THE GIRL UNDER THE OLIVE TREE BY LEAH FLEMING 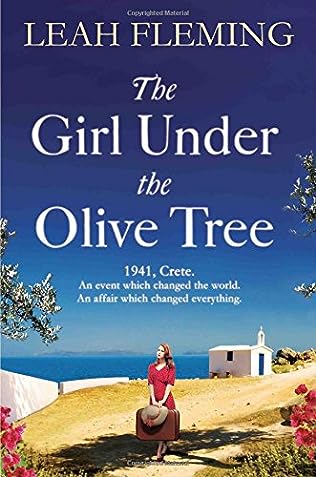 THE GIRL UNDER THE OLIVE TREE
BY
LEAH FLEMING

May 1941 and the island of Crete is invaded by paratroopers from the air. After a lengthy fight, thousands of British and Commonwealth soldiers are forced to take to the hills or become escaping PoWs, sheltered by the Cretan villagers.
Sixty years later, Lois West and her young son, Alex, invite feisty Great Aunt Pen to a special eighty-fifth birthday celebration on Crete, knowing she has not been back there since the war. Penelope George - formerly Giorgidiou - is reluctant to go but is persuaded by the fact it is the 60th anniversary of the Battle. It is time for her to return and make the journey she never thought she'd dare to.

The story starts in 2001 as Penelope is undecided about facing her fears and going back to Crete where she endured "the best and worst of times indeed, savage cruelty, suffering, hunger and yet it was also the time of my life, a time filled with the exhilaration of danger and the overwhelming kindness of strangers.  There were many things about that time that I could never tell anyone."

When she finally makes the journey with her family the story travels back and forth in time and we slowly build up a picture of Penelope's extraordinary life during the Second World War on Crete, of how she originally fled there from her home in Scotland to escape her mother's hopes of her marrying a title, when all she wanted was to be an archaeologist.

When Penelope helped an elderly Jewish man who had been beaten and robbed in the street she met her friend Yolanda and, together, they joined the Red Cross.  She felt more at home in Greece than in England and when war broke out she helped the wounded soldiers.

It is then that her extraordinary story is told, some in flashbacks to her family, and some she keeps to herself.

I also found it interesting to hear another side of the story told from one of the German officers who were there at the same time as Penelope and who also travels to the 60th anniversary.

This story is about how ordinary people coped in difficult and challenging circumstances, how they lived and died, about courage, uncertainty and hope, good times and bad times and how they fell in love during the most appalling conditions they had to endure.

Penelope was a fabulous character, she was warm, brave, loyal, feisty and incredibly likeable.

Not a light and easy book to read as it deals with a sad subject, but I really enjoyed it and, particularly the latter part, I could not put it down.

This is the second book I have read by Leah Fleming, my review of her novel, The Captain's Daughter which is about fictional characters who survived the Titanic, is here.

Special Thanks to the Publishers, Simon & Schuster for sending me this book.