Today, I am delighted to be part of Helen Fields's blog tour for her new audio book Perfect Remains thanks to Avon Books .... you'll find my review below 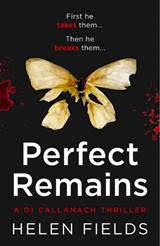 On a remote Highland mountain, the body of Elaine Buxton is burning. All that will be left to identify the respected lawyer are her teeth and a fragment of clothing.

In the concealed back room of a house in Edinburgh, the real Elaine Buxton screams into the darkness…

Detective Inspector Luc Callanach has barely set foot in his new office when Elaine’s missing persons case is escalated to a murder investigation. Having left behind a promising career at Interpol, he’s eager to prove himself to his new team. But Edinburgh, he discovers, is a long way from Lyon, and Elaine’s killer has covered his tracks with meticulous care.

It’s not long before another successful woman is abducted from her doorstep, and Callanach finds himself in a race against the clock. Or so he believes … The real fate of the women will prove more twisted than he could have ever imagined.

Fans of Angela Marson, Mark Billingham and M. J. Aldridge will be gripped by this chilling journey into the mind of a troubled killer.

Perfect Remains is the first in a new crime series and I would say that it's not for the faint hearted!

DI Luc Callanach, fresh from Interpol in France, is thrown headlong into this chilling and, frankly, quite gruesome thriller.  He is a man with a past which, as the story unfolds, reveals itself quite slowly.

There is more than one strand to this novel, which kept me guessing right to the end.

The narrator of this audio book coped very well with the different accents and I thought this all added to my enjoyment of the story.

Perfect Remains is well-written and cleverly plotted and, at times, quite exciting to listen to.  It is quite a dark read and sometimes I had to, literally, switch off the audio just to make sense of what I was hearing.

Overall, I enjoyed it and I will look out for more in this series, DI Luc Callanach is a likeable cop and I liked his friendship with his colleagues. 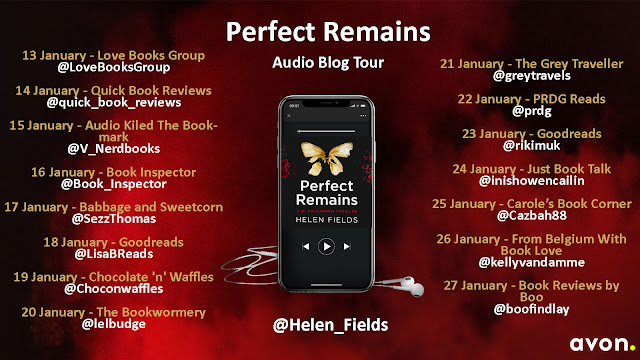 Dead in Dublin (The Dublin Driver Mysteries) by Catie Murphy


About Dead in Dublin

In Dublin’s fair city, where the girls are so pretty, murder occurs at the feet of sweet Molly Malone . . .
Ferrying tourists around Dublin for the Leprechaun Limo Service makes quite a change after years in the military. Still, Megan Malone is enjoying her life in Ireland. She likes the scenery, the easy pace, the quirky, quick-witted locals. Everything—except having one of her clients drop dead at the statue of fabled fishmonger, Molly Malone.
Most restaurant critics notch up their share of enemies. Elizabeth Darr, however, was a well-loved international star. She and her husband, Simon, had just had dinner when Elizabeth collapsed, and spoiled seafood is the first suspect. The restaurant’s owner, worried her business is doomed, begs Megan to look into it. Between her irate boss and a handsome Garda who’s both amused and annoyed by her persistence, Megan has her hands full even before she’s cajoled into taking care of two adorable Jack Russell puppies (which she is almost definitely not keeping). But if cockles and mussels aren’t to blame, can Megan find the real culprit . . .before another fishy death occurs?


Dead in Dublin is the first in a brand new cozy mystery series and the title gives us a clue as to where this series is set!

Molly Malone is an incredibly likeable character who loves her job as a limo driver and she loves getting to know her clients, she's a very friendly and out-going person, but she's also loyal and when one of her friends is getting the blame for someone's death, she is determined to do all she can to help them.

There were some clever twists and turns and I enjoyed the plot overall.

I look forward to more adventures with Molly in the coming series.

Catie Murphy, who has written numerous award-winning fantasy and Sci-fi books under the pseudonym C. E. Murphy, began writing around age six, when she submitted three poems to a school publication. The teacher producing the magazine selected (inevitably) the one she thought was by far the worst, but also told her—a six-year-old kid—to keep writing, which she has. She has also held the usual grab-bag of jobs often seen in an authorial biography, including public library volunteer (at ages 9 and 10; it’s clear she was doomed to a career involving books), archival assistant, cannery worker, and web designer. Writing books is better. She was born and raised in Alaska, and now lives with her family in her ancestral homeland of Ireland.