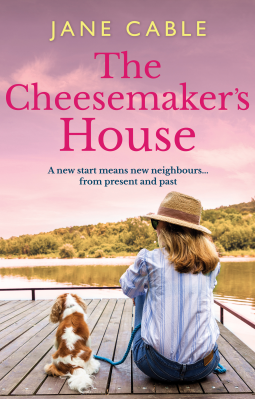 THE CHEESEMAKER'S HOUSE
BY
JANE CABLE

The novel follows the life of Alice Hart, who escapes to the North Yorkshire countryside to recover after her husband runs off with his secretary. Battling with loneliness but trying to make the best of her new start, she soon meets her neighbours, including handsome builder Richard Wainwright and kind café owner Owen Maltby. As Alice employs Richard to start renovating the barn next to her house, all is not what it seems. Why does she start seeing Owen when he clearly isn’t there? Where – or when – does the strange crying come from? And if Owen is the village ‘charmer’, what exactly does that mean?
Spoken in the 1st person by Alice, she is trying to re-build her life again in a small Yorkshire village by renovating an old barn next to her cottage.
The story centres around the discovery in the barn and of Alice seeing people who aren't there, hearing sounds and finding herself in strange situations from the past.  There's a touch of the supernatural and a possible romance in this novel.
It's an enjoyable enough story which I found a little slow to get going and it didn't really capture my attention throughout the whole book.  The character of Owen was annoying, he was moody, secretive and often untalkative.  When Alice is seeing and hearing sounds she doesn't seem to appear worried or scared which I found slightly strange.  She mentioned it in passing but talked as if it wasn't a big deal.
Alice was the only character I warmed to, all the others seemed one-dimensional and I didn't like any of them.  I think more could have been made of the barn and cottage history, I would have liked to have known more of that side of the story.

If you like your tales with a supernatural twist, a little romance and some genealogy thrown in then maybe you'd enjoy this.

I was surprised to learn that this won the Suspense and Crime category of the Alan Tichmarsh Show's People's Novelist Competition.  Unfortunately, I didn't find it suspenseful at all.

Check out Liz Loves Books for a great review and interview with Jane Cable, author of The Cheesemaker's House
No comments: