Book Review: THE SECRETS BETWEEN US BY LOUISE DOUGLAS

A chance encounter: When Sarah meets dark, brooding Alex,she grasps his offer of a new life miles away from her own. They’ve both recently escaped broken relationships, and need to start again. Why not do it together?A perfect life: But when Sarah gets to the tiny village of Burrington Stoke, something doesn’t add up. Alex’s beautiful wife Genevieve was charming, talented, and adored by all who knew her. And apparently, she and Alex had a successful marriage complete with a gorgeous son, Jamie. Why would Genevieve walk out on her perfect life? And why has no one heard from her since she did so?A web of lies: Genevieve’s family and all her friends think that Alex knows more about her disappearance than he’s letting on. But Sarah’s fallen in love with him and just knows he couldn’t have anything to hide. Or could he?


The story starts in Italy when Sarah first meets Alex and his young son, Jamie, on holiday.  Sarah is the narrator throughout and she is recovering from the trauma of recently losing her new born baby and then discovering her partner's infidelity, so she is quite vulnerable and that's probably why she jumps at the chance of a fresh start when Alex asks her to come and live with him and help to look after Jamie.


Her family and friends all thinks she's mad and she also has doubts as she thinks "what if Alexander was a conman, or worse?  Even if he had not actively abused his wife, she had her reasons for leaving him - and to leave the child, too, he must have done something awful.  He may be one of those Jekyll and Hyde characters, a charmer on the surface and an insecure and possessive control-freak on the inside."


Louise Douglas puts this seed of doubt in Sarah's head and this sets the tone for the rest of the book and, because we only know what Sarah is thinking, we don't actually know what everyone else is really thinking.  I thought this worked really well as I was never sure who to trust and I kept changing my mind as I wondered what could have happened to Genevieve.  Also the fact that Alex didn't talk very much about his feelings and his past life all added to the suspense.

Sarah's imagination starts to play tricks on her as she is all alone in the old creaky house in the middle of nowhere - did she really see Genevieve in the mirror and what are those scratching sounds in the wall?


I was completely engrossed in this story as Sarah tries to make sense of her new life and surroundings and the people around her, with the shadow of Genevieve always in the background.

Although this isn't an original plot .... it has been compared to the classic story of Rebecca which I haven't yet read .... I thoroughly enjoyed it as the tension gripped me until the end.

This is the 2nd book I've read for the Transworld Book Group Reading Challenge.

Louise Douglas's website is here, but it looks like it hasn't been updated recently as there is no mention of this book!  But you can read about her other published books. 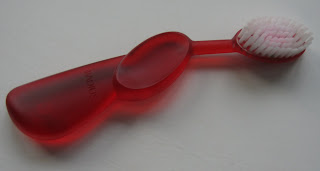 As you can see in the above picture this is no ordinary toothbrush!  The head is far larger than any other toothbrush I've ever used and the handle is a completely different and unusual shape as well.

Unfortunately, I did not like using this toothbrush at all, I found it too unwieldy to use.  I thought the handle was uncomfortable to hold and I could not get used to the size of the brush head.  I just couldn't continue with it - I never got used to using it all - and I did try for quite a while!  It just wasn't for me.


The only compliment I can give it is that the bristles were lovely and soft.


Apparently, as the Radius bristles do not absorb water they last up to three times longer and only need replacing every 9 months instead of 3.


They are available in different colours and can be bought from mypure.co.uk for £9.99. Two decades into the future humans are battling for their very survival when a powerful AI computer goes rogue, and all the machines on earth rebel against their human controllers.
The machines believe that the planet would be better off without humans, and that robots would be better caretakers of the earth's ecology.
Twenty minutes afer the war ends, Sergeant Cormac 'Bright Boy' Wallace is exterminating robots in the Alaskan wilderness when he finds a machine containing a an information cube - the robots' black box on the entire war. Inside are thousands of accounts of humans designated 'heroes' by the machines; from children to soldiers - those who fought, and those who died. A few individual robots also rejected the super-AI's homicidal campaign and join with human forces to save their collective freedom.
Robopocalypse tells the story of humanity's battle to survive, with fry cooks and ordinary citizens battling rogue smart cars and independent-minded kitchen appliances, while government scientists take on murderous supercomputers.

I don't read a great deal of Science Fiction books as sometimes I find them a little too 'heavy' and long-winded with lots of scientific jargon that I find difficult to follow ....... but I'm happy to say that this book doesn't fall into that category.  It was quite an easy read with some likeable characters.

As the blurb above mentions, the story starts just after the War has ended and we are introduced to the main protagonist who finds a black box that's showing holograms of the robot uprising and he writes it all down as he thinks everyone should know about it from beginning to end ......... and this is how the story starts.

The first chapter details how and why the uprising began and each chapter from then on is narrated by a different character - we meet most of them before Zero Hour (this is how the uprising is described) and they are a fascinating mix - including a soldier in Afghanistan, a little girl in the US who's dolls suddenly start talking to her, an elderly man in Japan who's a machine expert with a doll robot for a companion.  An interesting mix that we also meet during and after Zero Hour.

I really liked how each chapter deals with the way each person has coped with the uprising and how they survived it.

There are lots of descriptions of different kinds of robots who do all sorts of jobs from domestic robots in the house to Army soldiers, we know what they're made of, their size, shape etc. and I did have difficulties sometimes visualising these robots.

In the first months after Zero Hour, billions of people around the world began a fight for survival. Many were murdered by the technology they had come to trust: automobiles, domestic robots and smart buildings.

This isn't a gory story of fighting, though there is some of that, but there are human stories and tales of survival and heroism and this is what makes it so interesting and gripping.

A well-written and steady paced novel that was scary in parts (I even think the cover is scary!)
Daniel H Wilson's very informative website is here where he mentions the new film of Robopocalypse by Steven Spielberg.
No comments:

Extract of the Native New Zealand Kumarahou plant, well known as a natural soap alternative and used for its soothing and restoring properties. 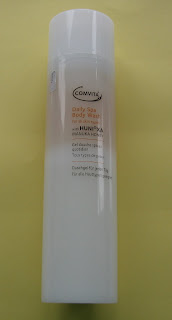 The Comvita Daily Spa Body Wash comes in a neat little bottle with a pump spray and the body wash is pale brown in colour with a creamy consistency.
It did leave my skin feeling soft and it didn't dry my skin out at all, though I did use quite a lot before I could get a good lather but other people may find that's okay for them.

I have used other products by Comvita and I have to be honest and say that I just don't like this smell.....I have mentioned it before in my other review..... it's just not a nice aroma at all.
Having said that, I do really like their products, they're well packaged and are extremely effective at what they do!

I have reviewed -- Comvita Anti-Ageing Radiance Plus Lotion

They are all available from mypure.co.uk

The Comvita Daily Spa Body Wash is available in a 200ml bottle for £17.00 at mypure.co.uk 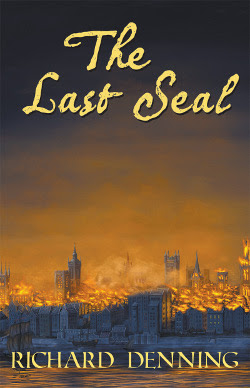 A powerful demon has been trapped under the city of London for over 300 years. Now, however, malevolent forces are at work in the 17th century, planning to unleash terror and chaos on the world. Two rival secret societies the Liberati and the Praesidum - are caught in a battle that threatens to destroy the city and its unknowing inhabitants.

When a truant schoolboy, Ben, finds a scroll revealing the location of magical seals that bind the demon, this throws him into the centre of a dangerous plot that leads to the Great Fire of London. Ben must overcome his own problems - fear of failure, desire for revenge, guilt over his parents deaths - if he is to protect the city, and confront the evil demon.

As the plot unfolds, a little more of the mystery about Ben's own past and his parents deaths is made known. Ultimately, Ben and his friends must combat sorcery, defeat the evil Liberati and destroy the demon if they are to save their city and themselves.


Just before the hour appointed for the service of Lauds - the sixth past midnight - a short figure stole down Ludgate Hill and out through the old city gate to a small church that lay beneath the shadow of St. Paul's Cathedral, which brooded over London like a mother hen protecting her clutch of chicks.

This is book one of the Praesidium series set in 17th century London.

This story starts in 1380 when a demon is summoned by a warlock inside the Cathedral and who then runs amok in central London ........ when a sorcerer manages to put him back in his prison the warlock vows to discover how to bring him back again, thus the battle between good and evil begins.

We are then taken to the year of the Great Fire of London, 1666, and introduced to the main characters of Ben, an orphaned school truant, Freya, the thief who lives on her wits, Tobias who wants the scroll that Ben finds and the bookseller Gabriel, member of the Praesidium.


There are some vivid descriptions including this of the Shambles in London where blood and offal from freshly butchered meat dripped on to the ground and ran off downhill.  All round the market, hawkers sold candles, beer, mussels, honeyed nuts and cane rods............beggars, prostitutes and pickpockets plying their trade.

This is such an exciting read, with lots of suspense and believable characters which I thoroughly enjoyed.  I loved the way the author weaved elements of fantasy around the historical facts of the Great Fire, all obviously meticulously researched.


Richard Denning's blog and details of the blog tour can be found here.