Book Review: TRUST IN ME BY SOPHIE MCKENZIE 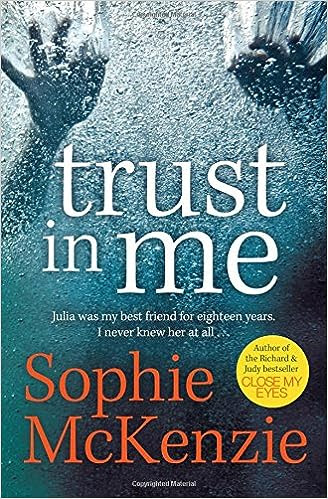 My Thoughts on this psychological thriller that I found a little too unbelievable .....


TRUST IN ME
BY
SOPHIE MCKENZIE


Julia has always been the friend that Livy turns to when life is difficult. United fifteen years ago by grief at the brutal murder of Livy's sister, Kara, they've always told each other everything. Or so Livy thought. So when Julia is found dead in her home, Livy cannot come to terms with the news that she chose to end her own life. The Julia that Livy knew was vibrant and vivacious, a far cry from the selfish neurotic that her family seem determined to paint her as. Troubled by doubt but alone in her suspicions, Livy sets out to prove that Julia was in fact murdered. But little does she realise that digging into her best friend's private life will cause her to question everything she thought she knew about Julia. And the truth that Livy discovers will tear the very fabric of her own life apart.

Overall I thought this was an engrossing read, as Livy tries to find out the truth about her friend Julia's suicide, she doesn't believe she killed herself, but everyone else thinks she did.

I liked Livy, I liked her honesty, her loyalty to her friend and her suspicious nature.

The theme of the story is 'trust' ...... Livy is learning to trust her husband again after his affair, can she trust her instincts about her friend, she thought she knew Julia better than anyone else and, above all, can she trust Julia's boyfriend.

Although I did enjoy the story, there were certain elements that I struggled with.  The more I read it the more unbelievable some of the parts sounded.  Particularly the fact that her so-called best friend, the friend she trusted above everyone else, had a secret boyfriend that she didn't tell anyone about, a boyfriend that asked her to marry him (or so he told Livy).  I just found it difficult to believe that she didn't confide in her best friend Livy.  Of course, this all added to the mistrust and suspense built up throughout the story.

Sadly, because of my disbelief, this did spoil my enjoyment and I would only give this a 3/5 rating.

Find out more about Sophie McKenzie at www.sophiemckenziebooks.com

Available to buy at Amazon UK - Amazon US - BookDepository.com