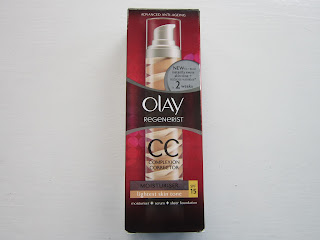 I've been using different Oil of Olay moisturisers on and off for many years but this is the first time I've used this particular cream and, so far, after several weeks of using it every day, I've been very pleased with the results.

It comes in a pretty pump action spiral bottle which made a nice change from the usual bland bottles I've used in the past.  It looks lovely sitting on your dressing table. 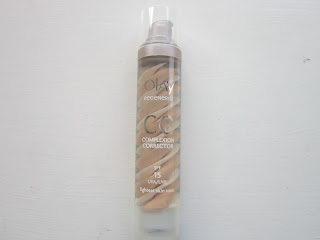 It blends very easily on my skin and feels lovely and creamy, it definitely evens out my skin tone giving it a nice rich colour.  My skin is very fair so this lightest skin tone is perfect for me.  It lasts all day but I have noticed that towards the evening my skin starts to feel a little greasy.

I don't normally wear make up and this is perfect for me as it is so light and my skin doesn't feel clogged.

The only downside is that it does feel a little uncomfortable for a few minutes just after I've put it on but that soon goes away, though I don't usually have any problems in that respect, so maybe it would not be suitable if you have a sensitive skin.
It contains SPF 15.

Available from Amazon.co.uk and all good beauty stores.

MURDER BY SYLLABUB
BY
KATHLEEN DELANEY

Published by Camel Press in May 2013

A ghost in Colonial dress has been wreaking havoc at an old plantation house in Virginia. The house is owned by Elizabeth Smithwood, the best friend of Ellen McKenzie's Aunt Mary. Mary is determined to fly to the rescue, and Ellen has no choice but to leave her real estate business and new husband to accompany her. Who else will keep the old girl out of trouble?

When Ellen and Aunt Mary arrive, they find that Elizabeth's "house" comprises three sprawling buildings containing all manner of secret entrances and passages, not to mention slave cabins. But who owns what and who owned whom? After Monty--the so-called ghost and stepson of Elizabeth's dead husband--turns up dead in Elizabeth's house, suspicion falls on her. Especially when the cause of death is a poisoned glass of syllabub taken from a batch of the sweet, creamy after-dinner drink sitting in Elizabeth's refrigerator.

Monty had enemies to spare. Why was he roaming the old house? What was he searching for? To find the truth, Ellen and her Aunt Mary will have to do much more than rummage through stacks of old crates; they will have to expose two hundred years of grudges and vendettas. The spirits they disturb are far deadlier than the one who brought them to Virginia.

A Syllabub is a sweet dessert drink, made from lemon juice, white wine and cream.  The Colonials loved it.

This is a thoroughly enjoyable cozy mystery, the fifth book in the Ellen McKenzie mystery series.

Ellen's Aunt Mary has been asked to help her old friend Elizabeth who believes a ghost has been trying to kill her.  On their first evening there the 'ghost' called Monty is found murdered by a glass of poisoned Syllabub.  Monty, the nasty stepson of Elizabeth's deceased husband, was found dressed as a colonial gentleman in a locked up house, but how did he get there and who would want to kill him?

As the plot deepens we learn that there are plenty of suspects and lots of motives.

For fans of colonial history and family secrets with twists and turns to keep you guessing to the end this is an entertaining read.

When Henry's wife is stabbed to death, he pays a prostitute to give him an alibi. Her body is discovered, strangled, and the police realise they are dealing with a serial killer who will stop at nothing to cover his tracks. While they are hunting for evidence, another prostitute is brutally murdered. On the track of a vicious killer, Detective Ian Peterson doesn't realise he is risking the life of his young colleague, Polly.


"An anonymous victim, no signs of the killer, no witnesses and no murder weapon"

This is the first of a new series to feature Detective Ian Peterson as the main protagonist after appearing in a supporting role in the first three Geraldine Steel novels.

I liked him instantly, he is in his mid-30's, intelligent, caring and passionate about his work as he awaits news of the promotion he has recently applied for.  Newly married to his childhood sweetheart, he wonders if he's done the right thing due to his wife Bev's moods. This is a theme throughout the book, his wife dislikes his job, the irregular hours and is always complaining about being on her own so much, he feels he is walking on eggshells and tries to avoid confrontations with her as much as he can.

Some of the sad characters include Henry who couldn't care less about his wife's murder, their son Mark who's a loner and, according to everyone, was close to his mother and young teenager Ben whose home life consists of being bullied and beaten by his stepdad and bullied by everyone else until one day he finds a knife which instantly gives him a certain respect.

The writing is sharp and crisp with short and neat chapters.

I would probably read another in this series due to the likeability of the main character.

I received this book from Nudge Real Readers in exchange for an unbiased review.

The website for Leigh Russell is here
Buy the book from Amazon.co.uk