Today, I am delighted to be part of Alice Castle's blog tour for her new book The Slayings in Sydenham thanks to Rachel's Random Resources Blog Tours .... you'll find my review below ...... and there's also a fabulous Giveaway! 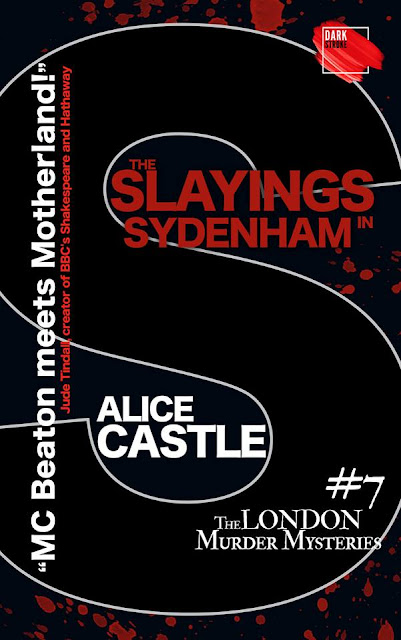 A dangerous move…
Single mum and super sleuth, Beth Haldane, has been set her most daunting task yet by handsome cop boyfriend Inspector Harry York. He wants her to find them a new home – outside Dulwich! Beth can hardly bear the idea, so when a young estate agent turns up dead, she diverts her energies to nailing the killer instead.
As it turns out, more or less everyone in Dulwich who has ever moved house may have a motive. But do some of the richest residents have an even stronger reason to murder the agent than others? What on earth is up with Dr Grover, head of prestigious private school, Wyatt’s? Does Beth’s uber-mummy nemesis, Belinda MacKenzie, have more reason than usual to be swaggering about the village? And who is sending Beth sinister text messages?
Join Beth for her seventh thrilling adventure amid the mean streets of south London, in The Slayings in Sydenham!
Purchase Links
UK - https://www.amazon.co.uk/Slayings-Sydenham-London-Murder-Mysteries-ebook/dp/B07ZJVR84P
US - https://www.amazon.com/Slayings-Sydenham-London-Murder-Mysteries-ebook/dp/B07ZJVR84P

I do enjoy these mysteries - author Alice Castle has such a languid and easy writing style that makes me feel as if I actually live in Dulwich, due to the so richly detailed view of this area of London.
Once again murder seems to follow Beth around as she is tasked by Harry to view a house in Sydenham when she suddenly discovers the estate agent's dead body in the kitchen!  Not one to ignore a slaying, and she feels a little bit guilty as he was in the house because of her, she feels the universe is telling her that it's her duty to solve the puzzle.
Beth is one of my favourite amateur sleuths, she is such an unlikely detective, she worries all the time, usually about her son Ben, always about her lack of money, and often about her relationship with Inspector Harry York, whose huge book library is threatening to take over Beth's cosy little house.
With the adorable Colin the labrador in tow, Beth's detective skills are put to the test yet again, and not just in trying to solve the slaying in Sydenham!
An enjoyable cosy mystery with richly drawn characters and an easy plot to follow. 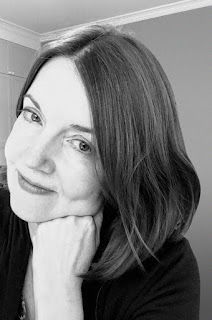 Before turning to crime, Alice Castle was a UK newspaper journalist for The Daily Express, The Times and The Daily Telegraph. Her first book, Hot Chocolate, set in Brussels and London, was a European hit and sold out in two weeks.
Death in Dulwich was published in September 2017 and has been a number one best-seller in the UK, US, France, Spain and Germany. A sequel, The Girl in the Gallery was published in December 2017 to critical acclaim and also hit the number one spot. Calamity in Camberwell, the third book in the London Murder Mystery series, was published in August 2018, with Homicide in Herne Hill following in October 2018. Revenge on the Rye came out in December 2018. The Body in Belair Park will be published on 25th June 2019. Alice is currently working on the seventh London Murder Mystery adventure, The Slayings in Sydenham. Once again, it will feature Beth Haldane and DI Harry York.
Alice is also a mummy blogger and book reviewer via her website: https://www.alicecastleauthor.com
Facebook: https://www.facebook.com/alicecastleauthor/
Twitter: https://twitter.com/AliceMCastle
Links to buy books: http://www.MyBook.to/GirlintheGallery http://www.myBook.to/1DeathinDulwich,
http://myBook.to/CiC
http://myBook.to/homicideinhernehill
http://myBook.to/revengeontherye
http://myBook.to/BodyinBelair
Death in Dulwich is now also out as an audiobook: https://www.audible.com/pd/B07N1VNMLT/?source_code=AUDFPWS0223189MWT-BK-ACX0-140657&ref=acx_bty_BK_ACX0_140657_rh_us
Alice lives in south London and is married with two children, two step-children and two cats. 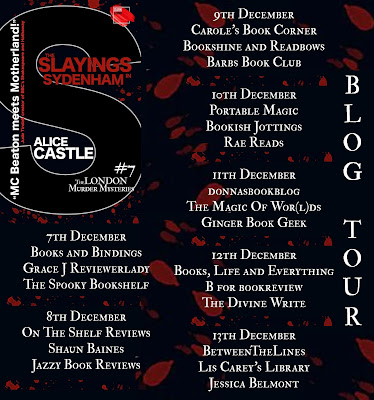 Giveaway – Win a signed copy of The Slayings in Sydenham  (Open to UK and US Only)
*Terms and Conditions –US and UK entries welcome.  Please enter using the Rafflecopter box below.  The winner will be selected at random via Rafflecopter from all valid entries and will be notified by Twitter and/or email. If no response is received within 7 days then I reserve the right to select an alternative winner. Open to all entrants aged 18 or over.  Any personal data given as part of the competition entry is used for this purpose only and will not be shared with third parties, with the exception of the winners’ information. This will passed to the giveaway organiser and used only for fulfilment of the prize, after which time I will delete the data.  I am not responsible for despatch or delivery of the prize.
a Rafflecopter giveaway