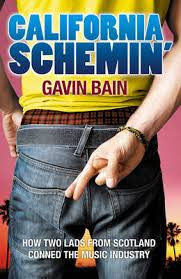 Genre: Fiction, True Story
Published by: Simon & Schuster (April 2010)
Pages: 274 (Paperback)
My Rating: 8/10
CALIFORNIA SCHEMIN' BY GAVIN BAIN
About the Book:
California Schemin' is the remarkable real life story of how two rappers from Dundee pretended to be two rappers from California and duped the record industry out of hundreds of thousands of pounds. Gavin Bain and Billy Boyd - or Silibil N' Brains, as they became known - were two ordinary Scottish boys who shared an extraordinary dream: to become rap superstars. Creating new identities for themselves, they persuaded the music industry that they were the latest hot young talent from California. Silibil N' Brains then lived out that lie for more than two years, securing an enormous record deal with Sony and being catapulted into the industry high-life, rubbing shoulders with the likes of Madonna, Eminem and D12. But, ironically, they could never actually deliver and promote the album that they were paid so much money to put together. As soon as they became famous they would be recognised by anyone who had known them in their former lives in Scotland and the dream would evaporate. As the pressure mounted, there would be disastrous consequences......
My Thoughts:
My first thoughts on finishing this book is that it's a wonder how Gavin Bain managed to write a coherent book at all after the huge amounts of alcohol he had consumed after his wild partying lifestyle! In fact, the book starts with him being rushed to hospital (not for the first time!) having drunk so much alcohol and popped so many pills that it was presumed it was a suicide bid.
First Lines:

.
This story is mostly about the build up to that night and how Scot Gavin -- a neurotic, obsessive, insomniac -- and his friend Billy Boyd -- handsome, confident, self-satisfied -- fooled everyone in this fascinating account of a crazy two years in the life of the rappers known as Silibil N' Brains. Their whole appeal was built on a lie, a scam.
Gavin's life in those days was full of highs (signed by Sony and given a huge advance) and lows (too many to mention) and we follow him through all these, knowing that he's heading for a fall. I did feel quite sorry for him several times, but he was his own worst enemy, he doesn't want our pity, he knows he was an idiot.
I enjoyed his writing style, it was simple, never dull or boring, he didn't try to sensationalise things - he just told it how it was - and I'm glad he did and I'm glad I read it.
Gavin Bain interviewed in the Scotsman.
Thanks to Simon & Schuster for sending me this book to review.