Today, I am thrilled to be part of D.N. Carter's blog tour for the 3rd book in the Outremer series In The Beginning ...... I have a wonderful guest post and a fantastic giveaway! 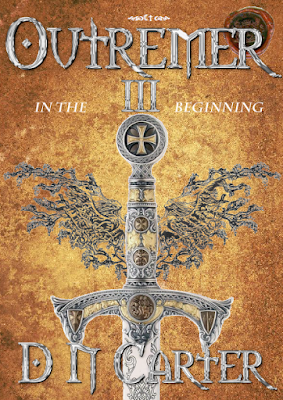 For Alisha and Paul, their lives settle into a new routine of normality... but the world around them is changing rapidly and that calm routine is violently interrupted. Whilst Paul strives to learn as much as he can about the mysteries in Egypt, new people enter their lives that have direct, immediate and profound affects upon them and the direction they will follow. As confusion grows about their own beliefs so does whom they can trust. As mysteries from the past stretch out calling them, they have to make decisions that not only affect their lives, but the lives of countless thousands both then and now. The decisions they made helped shape the course of history.

Confronted by impossible choices and in making those decisions, they experience at first hand the painful realities and repercussions that threaten to destroy them completely as personal tragedies rip through their lives as a direct consequence. As friends become foes, and foes become friends, nothing will ever be the same again as explosive revelations about mankind’s true past and the Church are divulged that once learned can never be unlearned or forgotten... for truth once whispered, is still truth which only grows louder no matter how hard evil forces try to control and suppress it with fear, hate and war; forces Paul will have to confront head on in order to protect and safeguard a greater secret and legacy destined for all of us in or time.

1: My greatest number one passion, when not writing, is for all things ancient and the more spiritual, mysterious or mystical, the better for me. A trip out to a castle, even an old section of wall, and I am there. My family have laughed at me when I have dashed out of the car, in the pouring rain, even snow, and once during a storm, just to check out an ancient standing stone or ruined hill fort...once driving the entire family what seemed like half way across Portugal to visit a ruin...only to discover it was shut and closed off when we arrived. They never let me forget that trip. I have lain inside the sarcophagus of the Great Pyramid and climbed sheer rock faces in Arabia in pursuit of my passion. I carry many broken bones and scars from previous adventures, but my love of the great outdoors still remains, Scotland and Ireland being my two most favourite locations in the world. I tell people that I may have been born English, but my heart belongs to Ireland, my soul to Scotland and my body to Wales. As an adventurer I have travelled the world extensively. I have led both research and archaeological expeditions and I continue to travel researching and exploring. It is that unquenchable sense of adventure and discovery that even now, in my mid fifties, means that I will spend any opportunity I get to travel. I love researching and planning new adventures to places of mystery and intrigue. Whether it is the Giza complex of Pyramids in Egypt to the rugged peaks of the Caucasus Mountains in Georgia, (so much research needs to be carried out there on the many anomalous constructions) to the jungles of Central and South America...or the Glens of Scotland and valleys of Ireland, I simply love the history and challenges involved in trying to understand our true past. I thrive on anything connected with ancient codes, especially ones that use mathematics and harmonics, such as the sound patterns evident at Rosslyn Chapel in Scotland, to the ones used by the Knights Templar. As I have learnt, mathematics and harmonics are the only true universal languages guaranteed to cross the millennia of time intact and complete, no matter how you represent them. They are constant and our ancient forebears knew this and fully understood these facts. It is why they used them to encode many secrets, of which we are only now beginning to recognise for what they are as our own understanding and technology increases. Trying to understand those codes is perhaps my greatest interest and passion. It is what drives me on my travels and led me to write Outremer so I could share just a small part of what I have learnt and believe I understand...and to challenge the reader to check out the facts I present within the four volumes.

2: My second greatest interest has to be drawing and painting. This is something I have always done since I could hold a crayon. I have produced all of the artwork within my Outremer series of books and posted on my official website, Facebook and Instagram sites. I work in all mediums from charcoal and pencil, to water colours and oils on canvas. Being able to draw has helped me enormously over the years in expressing ideas and concepts to others, but it has also helped immeasurably when it comes to seeing patterns in images or symbols, which in turn helped me see disconnected elements that when put together, actually shows a coherent and deliberately constructed code within. I have produced many oil on canvas paintings depicting pyramids and ancient sites whereby I have replicated some of the same ancient codes within their composition and imaging. Plus I over painted with luminous paint and Ultra Violet pen to highlight certain mathematical and harmonic aspects.

3: Parachuting. This is something I do, not as often as I once did, but now and again just to remind myself that I am alive. I am far from being an adrenaline junky thrill seeker, quite the opposite in fact, however the act of exiting a plane and putting your faith in a parachute you have packed yourself, is quite a good leveller for ones perspective on what really matters in life.

4: Microlight flying. I purchased a microlight just over two years ago. It certainly helps when attempting aerial surveys of ancient sites. Again this hobby has only really started due to my desire to fly over areas of interest that relates to my research work.

5: Learning to play the harp.  My family rolled their eyes when I informed them of this great news! My attempts at learning the guitar were farcical and embarrassing to say the least so I am hoping for better luck with a harp. The harp has special significance within my books so it only seems fitting that I attempt to master it.

Now that Outremer is complete...all four volumes, I am already working upon a prequel and then a factual compendium to compliment the series. I still run to keep fit...coughs...with my faithful shadow, the dog, in my attempts to remain fit, though in truth that usually ends up with me chasing him, chasing deer!  but I can often be found walking in a wood for hours on end...a forest has to be the best therapy ever. But ultimately my most favourite activity in the world has to be being wrapped up warm sat in my studio in England or my glorified shed in France, cup of tea to hand, gentle music, mainly film soundtracks, playing away and a good book. My library is quite extensive. The Peanuts books and Snoopy however will always remain supreme!

D. N. Carter was raised in Cyprus and has been fascinated by the history, myths and legends of the Middle Ages and mankind’s past since childhood. He has travelled extensively, his adventures fuelled by his enthusiasm for the ancient and the arcane have taken him from the Egyptian Pyramids of Giza, to the Languedoc region of France and the sweeping deserts of Arabia. Carter has a passion and a gift for decoding maps and mathematical codes, some of which feature in the pages of this book.

GIVEAWAY
I have a fantastic Giveaway where you can win ALL THREE EBOOKS in the Outremer series! There are two Sets to be won. Open Internationally. Enter via Rafflecopter below.

Check out all the other Bloggers on the Tour 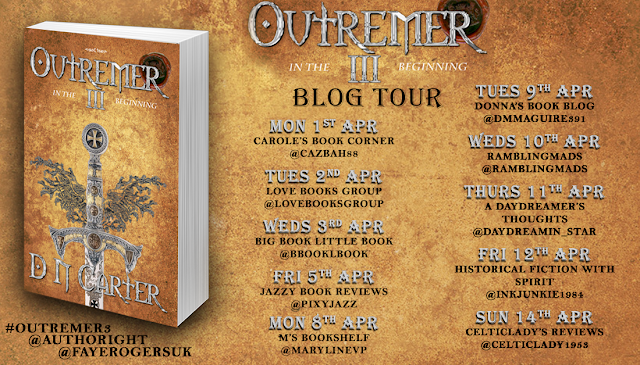