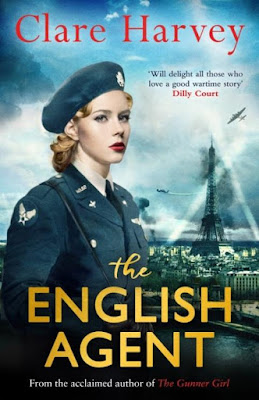 How far will two women go to survive a war?

Having suffered a traumatic experience in the Blitz, Edie feels utterly disillusioned with life in wartime London. The chance to work with the Secret Operations Executive (SOE) helping the resistance in Paris offers a fresh start. Codenamed ‘Yvette’, she’s parachuted into France and met by the two other members of her SOE cell.

Back in London, Vera desperately needs to be made a UK citizen to erase the secrets of her past. Working at the foreign office in charge of agents presents an opportunity for blackmail. But when she loses contact with one agent in the field, codenamed Yvette, her loyalties are torn…

Told from the perspective of three people, The English Agent tells the story of how they all become involved in the WW2 occupation of France and of the work of the Special Operations Executive organisation.

Edie is a young girl who was parachuted into France to be a wireless operator, Vera, her dispatcher who sees off many of the British Agents at the airfield and then there is Gerhardt a young German translator.   All from very different backgrounds.

It was fascinating to see how their lives changed during the course of the story, I really enjoyed the story of Edie, and how she was stronger than she appeared, when confronted with the horrors of the war, how she was tested.  Vera feels a connection with Edie as they're both running away from something in their past.

Though this is a work of fiction, this is a tribute to the bravery of the women who were plucked from their ordinary lives and put into extraordinary situations.....of how they coped.

Wonderful storytelling with believable characters, I was eagerly turning the pages, anxious to find out what would happen to them all, this is one of those stories that really makes you grateful that you were born after the war and didn't have those choices to make.


It was also interesting to read after the end that some of the characters were based on real people, such as Vera Atkins.....I found a picture of her (above) to see that steely determination in her eyes.

A recommended read if you're looking for an enthralling wartime story, with spies and double crossing agents.

Author Clare Harvey recently wrote a guest post especially for my blog on how images have inspired her while writing her story.  You can read the full piece here.  She believes that every picture tells a story.

Huge thanks to Jess Barratt at publishers Simon & Schuster (UK) for giving me the opportunity to read this novel.

Available to buy from Amazon UK - Amazon US