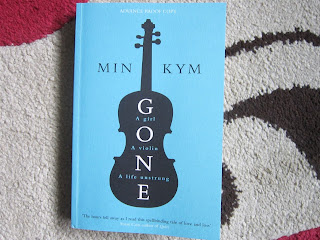 Published by Viking Books on 6 April 2017

A Girl - A Violin - A Life Unstrung

At seven years old Min Kym was a prodigy, the youngest ever pupil at the Purcell School of Music.  At eleven she won her first international prize.  She worked with many violins, waiting for the day she would play 'the one'.  At twenty-one she found it: a rare 1696 Stradivarius, perfectly suited to her build and temperament.  Her career soared.  She recorded the Brahms concerto and a world tour was planned.

Then, in a train station cafe, her violin was stolen from her side.  In an instant her world collapsed. She descended into a terrifying limbo land, unable to play or function.


Gone is one of the most moving stories that I have read in a long, long time.

Min Kym's narration is so beautiful and poetic as she talks of her childhood as a child prodigy.


There's that peculiar sensation of feeling completely normal within yourself, but acutely aware that you are different.......your responsibilities take root, flower - to your parents, your tutors, the time everyone has invested in you, the financial outlay.....great expectations indeed.  You start to carry a burden on your shoulders, a burden that your violin is responsible for, and only it, can alleviate.


She also lived in two worlds - the Korean way of rules and obedience and the English way of questioning everything, which goes some way in explaining what happened on that night.

Her childhood flew by and she played her way through several violins until she found 'the one' and I thought that the writing was so wonderful as she described her feelings on playing it for the first time ... she felt she had found her 'soul mate'.

I am not musical in any way, I can't sing or play an instrument, but it didn't matter as I was drawn into this other world of Brahms and Schubert and Beethoven and concertos and solo performances and violins.  Her love for these composers shines throughout her story.

Moving on several years and I could hardly bear to read the build up to her violin being stolen - I could feel the pain in her writing.  It's almost unbearable reading the aftermath. I had no idea whether her violin was ever found or what happened before I started to read her story so I'm not going to spoil it here for anyone who doesn't know.

This is such a lovely book, with a rhythmic and unique style of writing that I really enjoyed.  It was sad, poignant, uplifting, educational and very, very special.

I shall definitely remember the name of Min Kym for a long time to come. 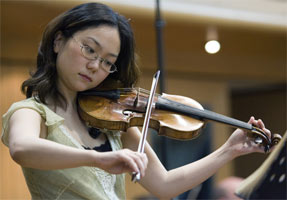 My thanks to publishers Viking for giving me the opportunity to read this story.
They are publishing Gone on the 6th April 2017 and, at the same time, Warner Classics will break new ground by releasing a soundtrack to accompany the book.  To be available on Spotify and Apple Music, the Gone album will feature the original recordings of pieces played by Min Kym through her life, so you can listen as you read.