BOOK NEWS: New Film 'Where the Wild Things Are' sends parents into a 'rumpus' 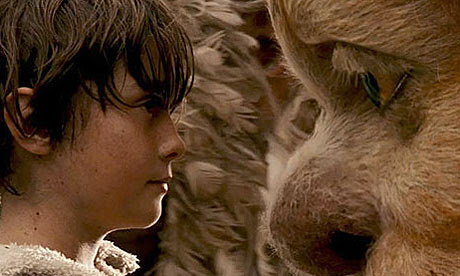 Max (Max Records) encounters the monster Carol (James Gandolfini) in Where The Wild Things Are.

When Jess Hyde picked a copy of Where the Wild Things Are from the bedroom shelf last week, her seven-year-old son, Arthur, pointed to it and said: "That gives me nightmares."

"He had never mentioned it before," says the mother of three from Frome, Somerset. "But it is a tricky one because the monsters are quite scary. They are not friendly pictures. It is something about the colour – they are brown and grey and not very endearing." Arthur's mother, who was given the book by friends, asked her son if he wanted her to read it. "He still said yes," she laughs.

The spooky palm tree fronds and twisting vines that invade the bedroom of naughty Max in this nursery classic will soon be invading the imaginations of young children anew, as a film version of Maurice Sendak's book heads for the cinema. A modern morality tale, Sendak's story sees little Max reject his parental home for a world where he can become "king of all wild things". It has been brought to the screen this autumn by director Spike Jonze and writer Dave Eggers, who adapted the screenplay. Their film has won plaudits from many critics, but some parents have been troubled by the ferocity of the story, and by the power of Jonze's new interpretation. As a result, they are advising other families to stay away.

The protest, or "wild rumpus" to borrow a phrase from the book, that has greeted the release of the film echoes disquiet about the bleak message embedded in Disney/Pixar's latest animated release. Entitled Up, it has been viewed by many parents as anything but.

A handful of American educationalists, including Professor Holly Willett, of Rowan University in New Jersey, have rushed to defend Sendak's 1963 book, but the new film stands accused of presenting unsettling images that, although popular, are likely to breed nightmares. A public debate about whether or not a child's appetite for being frightened should be indulged is now in full swing.

"This is a classic hero's story in which the protagonist undertakes a journey and returns a wiser person," Willett, an expert on children's literature, has argued in the American press. And Sendak's original tale has certainly stood the test of time: it is a reliable classic on the shelves of middle-class toddlers on both sides of the Atlantic and in 1983 composer Oliver Knussen turned it into a one-act opera that has joined the modern repertoire.

"I remember reading the Sendak book to my children and it frightened the pyjamas off them," Roger McGough, the poet, said this weekend. "But they went back to it. It is a scariness that you can control and that ends happily."

To read the full article in The Guardian click here