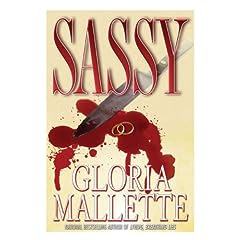 LOUD! The music was loud! The bass thunderous! The singing exhilarating! The catchy, finger-popping, toe-tapping music was heart pounding; but there was no party.

The Prologue is spoken by Myra Barrett, who is lying on the floor of her apartment, and in terrible pain due to the many stab wounds inflicted by her boss, Norris Yoshito, who she has been dating in secrecy. As she is lying there wondering why he's tried to murder her and hoping that someone will help her, her room-mate is lying dead near her.

In the next chapter and from then on the story is told in the 3rd person and we meet Sassy, a popular romantic novelist, who is busy signing copies of her new book. She looks up and meets the eyes of Norris Yoshito and Sassy believes she has met the man of her dreams. After meeting for a drink, they start dating and gradually fall in love. Can this wonderful, charming, polite man really be the same person who stabbed Myra?

This sets the premise for the rest of the novel. The suspense was maintained throughout as we discover that other people who knew Norris are murdered, and when the police started closing in the last quarter of the book was incredibly gripping.

But I felt that it did slow down a little in the middle due to a long conversation in the bedroom of Sassy's cousin, Bernard who was dying of AIDS; it just dragged on and on and on, which drove me mad.

However, I do think this is a decent crime thriller. The character of Sassy was very likeable and the other people in her life seemed real enough for me to care about what happened to them.

For more on Gloria Mallette her website can be found here.

Special Thanks to Gloria Mallette and Bostick Communications for sending me this book.