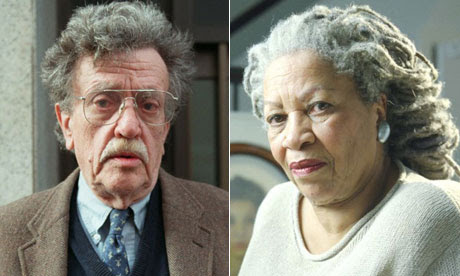 American libraries and bookshops are celebrating the freedom to read this week but attempts to force books off shelves are still rife across the country, from the removal of Sherman Alexie's award-winning young adult novel The Absolutely True Diary of a Part-Time Indian from shelves in Missouri to protests over Kurt Vonnegut's seminal title Slaughterhouse-Five.

As this year's Banned Books Week begins, Joan Bertin, executive director of the National Coalition Against Censorship, said the organisation is "increasingly ... seeing challenges to celebrated contemporary novels". The NCAC has recently protested against the banning of Alexie's novel, which drew parent complaints in Missouri over a description of masturbation, against the removal of Toni Morrison's Song of Solomon from classrooms in Indiana and against the cancellation of the appearance of bestselling author Ellen Hopkins at a Texas literary festival following parent protests. It is also investigating the banning of Slaughterhouse-Five from another Missouri school and the removal of six books by Hopkins from a Nevada middle school library.

"If young people are going to become sophisticated readers and thinkers they need to be exposed to this kind of literature in school," said Bertin. "Depriving students of the opportunity to read widely stunts their emotional and intellectual development and puts them at a tremendous disadvantage in school and in life."

This week's Banned Books celebrations saw authors gather in Chicago at the weekend to share their experience as the targets of censors and read from their work. Young adult author Chris Crutcher, who hosted the event, told the Guardian he was "proud" to frequently make it into the list of the top 10 authors challenged or banned in the US.

"I think it's important to stand up to censorship because I think intellectual freedom is a cornerstone for any democracy. I think people don't understand what a slippery slope it is to let a relatively small group with a relatively loud voice, make decisions about decency and morality," he said. "Once one book is banned, all books are at risk."

Carolyn Mackler, whose novel The Earth, My Butt, and Other Big, Round Things was the eighth most challenged book in the US last year for reasons including its "offensive" language and sexually explicit scenes, sent a statement to be read at the event. "While I'm honoured to be in the company of such amazingly talented authors, I'm certainly not honoured to be on the list," said Mackler. "And while I'm no stranger to book challenges, for some reason I'm always surprised."

To read the full article see the guardian.co.uk