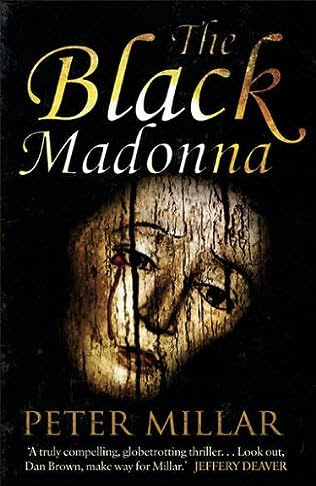 THE BLACK MADONNA BY PETER MILLAR

In ruins on the outskirts of Gaza, the war-torn Palestinian city that had been a metropolis since the times of the pharaohs, a plucky young female archaeologist has made a remarkable find: possibly the earliest known image of the Virgin Mary, created during her lifetime. But before she can reveal it to the world, it is stolen from her in a brutal personal assault amidst the chaos of an Israeli airstrike. But who has stolen it and why? What dark hidden secret did it conceal? With her former lover, an Oxford professor of comparative historiography – the science of comparing alternative versions of the past – she sets out on a dangerous quest to some of the holiest sites in Christendom.

In a tale of murder, treason, intrigue and geopolitics, they uncover a web of conspiracy, cover-ups, confused mythology and interlinked religion that dates back to the last pagan Roman emperor, and maybe even to the very origins of life on earth.

Peter Millar has been compared to Dan Brown, though having read 'Angels and Demons' I think that Peter Millar's storyline is more believable and exciting and is much better written overall.

When Nazreem Hashrawi, Museum Curator, discovers "one of the most important, semi-legendary items in Christian lore" her life is instantly in danger from people who are not averse to brutally torturing and murdering people who get in their way. But just why these people would want the Madonna and why they would want to kill Nazreem is revealed slowly and tantalisingly in this very compelling story with twists and turns that I found hard to put down.

The tension built up steadily as Nazreem and her ex-lover Marcus Frey, an Oxford Professor, travel to Spain and Bavaria in an effort to seek out other similar idols while meeting people such as the devout Sister Galina in Germany who mysteriously vanishes after speaking to them.

I thought the plot was fascinating overall and Peter Millar has obviously done an amazing amount of research; it seemed that every character had an encyclopaedic memory of historical events and which sometimes seemed too much and I couldn't always take in all the facts and figures, though I could follow the story (just!) without it spoiling my enjoyment.

Even though it is a complicated plot at no time did I feel that I didn't know what was going on, the style of writing was very readable, most of the characters were believable (with a couple of exceptions) and I liked the way that an intelligent headstrong young Muslim woman was one of the lead characters.

Thoroughly recommended for anyone who enjoys a thriller with a historical lesson - the authors notes at the back of the book make for interesting reading too.

My Thanks go to Arcadia Books for sending me this book to review.

Read my Q and A with Peter Millar here