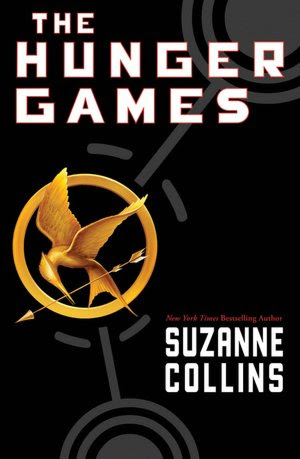 THIS HAS BEEN REVIEWED BY MY SON

Sixteen-year-old Katniss Everdeen regards it as a death sentence when she is forced to represent her district in the annual Hunger Games, a fight to the death on live TV. But Katniss has been close to death before - and survival, for her, is second nature. "The Hunger Games" is a searing novel set in a future with unsettling parallels to our present. Welcome to the deadliest reality TV show ever...

When I first heard about Suzanne Collins "The Hunger Games" I thought it would be an epic novel about kids being forced to fight in jungles and would be a philosophical meaning about how corrupt and injust the legal system and the government is.

So you can understand my reluctance when I started hearing people comparing it to Twilight and Harry Potter.

These reluctances where soon banished when I found it to be not as huge and clever as I thought but still a fun, exhilarating ride with a female protaganist that you can't help but root for. I would mostly compare it to 1984, although not as depressing, and the Japanese movie "Battle Royale", although not as brutal. Somewhere in between is the Hunger Games. It is fun, exciting and this is only part one, which means it hopefully will get better and better.

Also look out for the motion picture coming out in Spring 2012.

Email ThisBlogThis!Share to TwitterShare to FacebookShare to Pinterest
Labels: Suzanne Collins, YA