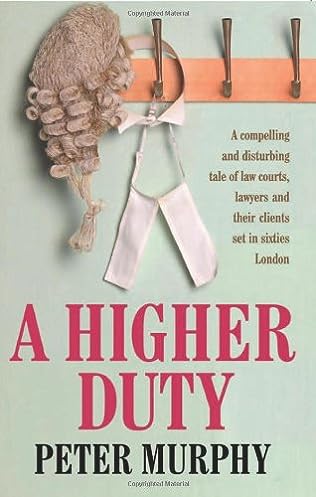 A HIGHER DUTY
BY
PETER MURPHY

About the Book (blurb from the back)

Early 1960's London.
Four barristers in two fiercely competitive chambers represent the opposing sides of a bitter divorce.
Intrigue, hypocrisy, blackmail and long concealed murder result in a deadly game of double bluff.
As innocent lives become entangled, nothing is sacred - not even justice.
'Anne, we have to talk.' he said. 'This is very dangerous for both of us. If anyone should find out....'

A Higher Duty is an absorbing insight into the world of Barristers, Lawyers, the Law and the games they play.
The story starts in December 1960 with a Rugby Club dinner at Cambridge University when, fuelled by alcohol, some of the students think it's a good idea to throw a young man into the icy cold river......unfortunately for them, and him, he drowns.  Afterwards no-one is charged with his murder.
Fast forward to October 1962 and we're introduced to the principal characters, including Philip Dougherty husband to Anne who is being sued for divorce on the grounds of cruelty; the opposing Solicitors and Barristers who are going to represent them in court, along with other members of the Law Society who make up this intriguing novel.

I do enjoy a good courtroom drama and, while, most of the story takes place outside of the courtroom, it makes for fascinating reading.
In those days the law courts were dominated by white male University graduates but Peter Murphy introduces us to the Jewish Ben Schroeder and a woman (gasp) who are trying to break the conventional stereotypes, where they encounter prejudice and become entangled in an intrigue which could make or break their futures.
I enjoyed all the conspiring, manoeuvring and colluding between scheming Barristers.
This is the inside story of what goes on underneath those wigs, tight collars and cloaks and it's not always pretty.
Overall a compelling and entertaining read with an original storyline.

The character of Ben Schroeder is to be featured in Peter Murphy's next book A Matter for the Jury ..... this is the first in a new series and will be published in July 2014.
Peter Murphy is well qualified to write this type of book as, after graduating from Cambridge University he spent a career in the law, as an advocate and teacher, both in England and the United States. His legal work included a number of years in The Hague as defence counsel at the Yugoslavian War Crimes Tribunal. He lives with his wife, Chris, in Cambridgeshire.

Source:  I received a copy of this book from Nudge Real Readers in exchange for an honest and unbiased review.