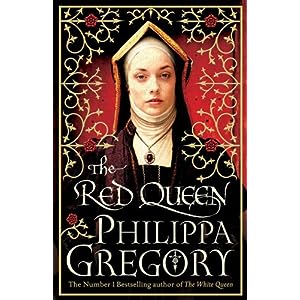 THE RED QUEEN BY PHILIPPA GREGORY

The second book in Philippa Gregory's stunning new series, The Cousins War, brings to life the story of Margaret Beaufort, a shadowy and mysterious character in the first book of the series - The White Queen - but who now takes centre stage in the bitter struggle of The War of the Roses.
The Red Queen tells the story of the child-bride of Edmund Tudor, who, although widowed in her early teens, uses her determination of character and wily plotting to infiltrate the house of York under the guise of loyal friend and servant, undermine the support for Richard III and ultimately ensure that her only son, Henry Tudor, triumphs as King of England.

Margaret Beaufort's only desire in life is for her son, Henry Tudor, to become the King of England. This book is the story of how she sacrificed everything to ensure that that happened.

She believed she was special and that the Lancaster House was blessed by God, she spends hours on her kness in prayer and her heroine was Joan of Arc, in fact she often asked herself 'What would Joan do now?' when she was faced with a tough decision.

I am a highly intelligent, highly educated woman, from a royal family, called by God to great office, guided personally by the Maid, and constantly hearing the voice of God in my prayers.

It is narrated by Margaret who comes across as not very likeable, incredibly pious, very jealous of her rival, Elizabeth Woodville (The White Queen), single-minded and devious. Philippa Gregory has really brought her to life and I was gripped by the seemingly endless battles between the armies of the Lancaster and the Yorks, but Margaret never stopped hoping and plotting and scheming, even when her son had to be raised by her enemy she continued telling him that he was still a Lancaster and that one day he will be the King, and not to give up believing.

I enjoyed the first book in 'the cousins war' The White Queen but I enjoyed this even more, I thought the writing was more descriptive and flowed easier. Although I really didn't like the emotionally cold Margaret Beaufort I did admire her determination and self-belief.

My review of The White Queen can be found here

My thanks to Simon & Schuster for sending me an uncorrected proof copy for review.