My stop today is a review for The Baffled Beatlemaniac Caper, a fun cozy mystery featuring an amateur male sleuth.  I hope you enjoy it! 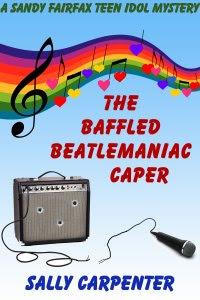 In the 1970s, teen idol Sandy Fairfax recorded 10 gold records and starred in the hit TV show Buddy Brave, Boy Sleuth. Now he’s a 38-year-old recovering alcoholic with dead bodies getting in the way of his comeback! An easy gig as the guest celebrity at a Midwest Beatles fan convention turns deadly when a member of the tribute band is murdered. When the police finger Sandy as the prime suspect, the boy sleuth is back in action to interpret the “Beatle-ly” clues and find the killer.

Set in 1993 Sandy Fairfax hasn't made a public appearance in 5 years, a former 1970's TV show boy sleuth and teen idol.  Now 38 and divorced, his wife has issued him with an ultimatum -- he can't see his two children until he's sober and working, he jumps at the chance to attend a Beatles Convention as a guest speaker and decides to quit drinking once and for all and thinks to himself --

"This gig sounds easy enough.  How much trouble can I get into at a fan convention?"

If I had known the answer to that question, I'd have run inside, locked the doors, and never left the house again.


When a member of the tribute band is murdered, in Sandy's arms, leaving a spoken clue behind, Sandy just can't forget his days as a boy sleuth on his TV show and starts digging for clues to the murderer and digs himself into trouble with the local police.

This is a really enjoyable mystery, some of Sandy's tales from his teen idol days sounded so realistic that I found myself starting to believe them!  Fabulous story-telling from Sally Carpenter.  There are plenty of Beatles references, to songs, albums, concerts.  You don't have to be a Beatles fan to enjoy this but I think if you are you'll love it.

It had it all, funny, likeable protagonist with flaws, original and clever storyline, some oddball characters, entertaining writing that made be laugh.  A fab read!


Carpenter also has a master’s degree in theology and a black belt in tae kwon do.


“The Sinister Sitcom Caper,” the second in the Sandy Fairfax Teen Idol series, is published by Cozy Cat Press. The third book, “The Cunning Cruise Ship Caper,” is due in 2015.
Her short story, “Dark Nights at the Deluxe Drive-in,” appears in the 2013 anthology “Last Exit to Murder.”
“Faster Than a Speeding Bullet” was published in the “Plan B: Vol. 2” e-book anthology.
Her short story “The Pie-eyed Spy” appeared in the Nov. 23, 2013, issue of Kings River Life ezine.
She’s a member of Sisters in Crime/Los Angeles and “mom” to two black cats.
Webpage: http://sandyfairfaxauthor.com
Facebook: www.facebook.com/sally.carpenter.54
GoodReads: (kindle version not on GR yet)
Email: scwriter@earthlink.net
Purchase Links  Amazon