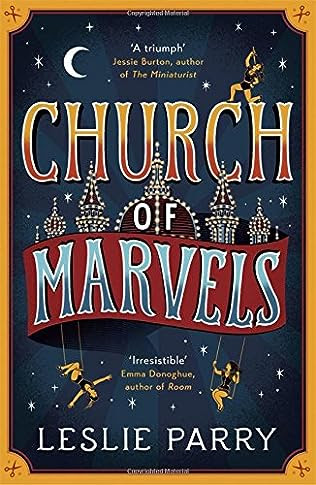 CHURCH OF MARVELS
BY
LESLIE PARRY

From the sideshows of Coney Island to the tenements and opium dens of the Lower East Side, to an asylum on Blackwell's Island, follow the adventures of two sisters, an enigmatic orphan, a mortician's bride, an assortment of freaks, and a newborn baby, as they come together in the Church of Marvels.....

"I haven't been able to speak since I was seventeen years old."

What a compelling first sentence!  This is just the start of what turns out to be an amazing, shocking, fascinating, hugely entertaining story of some of the weirdest characters I've ever had the pleasure to meet.

The story is told through the eyes of three people: Sylvan, 19, a night soiler, who has the unenviable job of emptying the privies behind the tenement houses.  He has 'the skin of a gypsy, hair of a negro, build of a German, nose of a Jew' .... he didn't belong to anyone.  One evening he finds a baby girl discarded among the muck and decides to take her home and try to find the mother.

Then there is Alphie (my favourite character) who has just arrived in a lunatic asylum, she believes her mother in law has put her there without her husband (the undertaker's) knowledge.  She had been on the street since she was 14, is wordly wise and has no intention of staying in the asylum.

Lastly we meet Odile, who's mother used to have a touring sideshow with a wonderful assortment of oddities.  But when a fire breaks out with tragic circumstances her sister disappears to New York and Odile travels to find her from Coney Island, where nearly every person she comes into contact with has a strange affliction.

Bringing New York to life, the seedy lives, tenement blocks, theatres, gambling parlors and opium dens, the terrible brutality of the asylum, this is a tale rich in strangeness with a dark underbelly.

As the story unfolded their lives intertwined with twists and turns that I never saw coming.

The writing is incredibly descriptive and lyrical, with characters so unbelievable but so life like.  The story is unlike anything I've read before, and I absolutely loved it!  I would recommend the marvellous Church of Marvels if you enjoy historical fiction with dark elements and dark secrets.

Thanks to Bookbridgr for giving me the opportunity to read this novel. 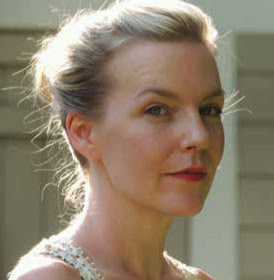 Leslie Parry is a graduate of the Iowa Writers’ Workshop. Her short stories have appeared inVQR, The Missouri Review, The Cincinnati Review, The PEN/O. Henry Prize Stories, and elsewhere. Church of Marvels is her first novel. She currently lives in Chicago.