Spotlight and Excerpt: THE BROKEN PLACES: A MEMOIR BY JOSEPH MCBRIDE 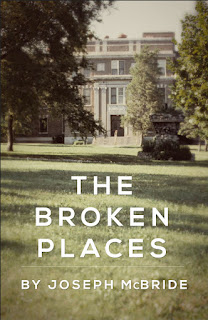 In The Broken Places, Joseph McBride, an internationally acclaimed American cultural historian, recalls his troubled youth in the Midwest during the 1960s. Searingly immediate and yet reflective, this is the author's memoir of his breakdown as a teenager and triumphant recovery. It gives an unsparing look at physical and psychological abuse, family dysfunction and addiction, sexual repression, and Catholic guilt. And at its heart, this is a haunting, often joyous love story.
The Broken Places offers an unforgettable portrait of Kathy Wolf, a brilliant, vibrant, shattered young Native American woman who taught Joe how to live even though she could not save herself. Kathy's life exemplifies what Ernest Hemingway wrote, "The world breaks every one and afterward many are strong at the broken places. But those that will not break it kills. It kills the very good and the very gentle and the very brave impartially." This extraordinary love story will move you and disturb you.

Her skin was olive-colored, she had gaunt cheeks with high cheekbones, and her raven-black hair was cut sharply across her face. She had lovely tawny legs and a slender figure with small breasts that showed provocatively through her clothing and moved freely as she walked. She wore a black pleated skirt and a black knit pullover with a small silver cross around her neck hanging on a chain between her breasts. Her large, opaque brown eyes looked like bottomless pools you could dive into and never come back.

She appeared to me on a gray winter afternoon, five days after my transfer from the central building, materializing in a sudden flaring of light from a shadowy doorway. Her head was tilted away, but as she lifted her long black eyelashes and glanced up at me while lighting her cigarette with a silver lighter, her thin, sensual lips formed a quizzical smile over the flame.

Blank-faced and silent, I passed her on my way into the vending machine room off the basement corridor between the men’s and women’s dorm buildings in the sprawling Main complex. A single square window at ground level, high up the cold stone wall, let in the winter light that dimly illumined the empty room. The window glass was frosted and partially covered by a ridge of hard-packed snow that Monday in mid-February.

I moved mechanically along a row of vending machines, stuffing the pockets of my floppy gray sweater with candy bars. At the end of the row was the Coke machine. I put a quarter in the slot and stared at the paper cup as it dropped into place behind the plastic window and began to fill.

I became aware that I was not alone in the room.

The girl had entered, silently as a cat, and was working the levers of the cigarette machine at the other end, under the window. The sun moved from behind a cloud and rays of cold light shot from the cross between her breasts as her body lurched back and forth and the coins clattered in the tray and the pack of Benson & Hedges came down with a thump, her long delicate fingers scooping it out and the scarlet nail on her index finger slitting the cellophane.

I backed into the corner between the pale green wall and a trash can overflowing with candy bar wrappers and sticky paper cups. It was hot on this side of the room; the wall was beaded with moisture and the place smelled like moldy old socks; I could feel the heat from a steam radiator rising to my head. I heard girlish laughter from the area around the cigarette machine. Two other women had joined the olive-skinned girl, a muscular black teenager with a broken front tooth, and a wild-eyed, hairy-legged white woman in her thirties, who was laughing at something the olive-skinned girl said as she tossed away the crumpled cellophane wrapper and gave the black girl a cigarette, lighting it for her with her silver lighter.

Too many sensations crowding in at once made me lightheaded. I leaned heavily against the wall, my right leg grazed the radiator, and I felt the searing metal through my pants. As I pulled away the heat left a small black smudge on my brown corduroy pants leg. My eyes misted and my chest tightened with pain. I ground my front teeth into my lower lip and blinked to clear my eyes.

The girl stood next to me.

"Hi," she said with an easy smile.

I stared at her dumbly, feeling my skin flush and my head tremble. Her eyes moved back and forth rapidly as she looked up at me. My throat felt dry and choked, and the sun from the window assaulted my eyes, flooding from behind her silhouetted figure.

I heard the Coke machine click off as I brushed past her. The plastic window dropped as I removed the cup, and from the doorway I heard her laughing with her friends. As I turned the corner into the hall, their voices faded into footsteps and chatter of other people entering the room behind me.

I was angry. I thought, She must be mocking me. Why else would she approach me? Why else was she grinning like that?

The truth was that I could not bear to be looked at by a woman. I knew now how terrible I looked. After glancing at myself in a mirror back in November, I had a further sign that something might be going dreadfully wrong with my body. It came at twilight one cold, dank, rainy day in early December when I waited for the bus outside school, staring at the reflections of the streetlights in the moving water in the gutter, and a little girl, no more than eight years old, came past me, smiling and humming; I turned toward her, and her smile became a grimace.

She cried out, "That face!"

Before I could react, the little girl was gone, skipping and humming through the puddles in her bright yellow raincoat. I felt like I wanted to kill her. If I could have reached out and grabbed her at that moment, I could have ripped her to pieces and stomped her into the gutter. But the bus came, interrupting my murderous fantasies, and I hurried past the driver, head bowed, and burrowed into a seat in the back, where it was dark and no one would see me. I tried my best in the following weeks to suppress that memory, but now it was back.

And now this girl came along, with her sexy body and her casual grin. She stirred me. And frightened me. Feelings long debased and deadened were coming back in an overwhelming rush. 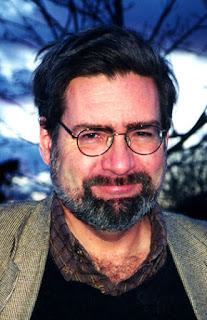 Joseph McBride is a professor in the Cinema Department at San Francisco State University, where he has been teaching screenwriting and film history since 2002. He is an internationally recognized film historian, the author of eighteen books, including the acclaimed biographies Frank Capra: The Catastrophe of Success, Steven Spielberg: A Biography, and Searching for John Ford. McBride has also published a celebrated book of interviews with director Howard Hawks, Hawks on Hawks, and three books on Orson Welles, most recently What Ever Happened to Orson Welles?: A Portrait of an Independent Career. He is currently working on a critical study of the celebrated German American director Ernst Lubitsch.
The Broken Places, published in 2015, is a memoir of McBride’s youth in Milwaukee and Madison, Wisconsin. McBride was educated at St. Bernard’s Grade School in suburban Wauwatosa; Marquette University High School in Milwaukee; and the University of Wisconsin, Madison. The book is a longtime labor of love for the author, as is his 2013 book Into the Nightmare: My Search for the Killers of President John F. Kennedy and Officer J. D. Tippit. McBride was a volunteer in John F. Kennedy’s 1960 Wisconsin presidential primary campaign and appears in the classic documentary film about that campaign, Primary.
McBride’s books have been published in French, Italian, German, Polish, Spanish, Finnish, Japanese, and Chinese. The French edition of Searching for John Ford, A la recherche de John Ford, won the Best Foreign Film Book of the Year award from the French film critics’ organization in 2008.
McBride has been a professional journalist since 1960 and has written for such publications as Life, The New York Review of Books, The New York Times Book Review, The Nation, Sight and Sound, Film Quarterly, Film Comment, Cineaste, and the Writers Guild of America magazine Written By. He was a founder of The Velvet Light Trap, a reporter for The Wisconsin State Journal (Madison) and the Riverside (California) Press Enterprise, and a reviewer, reporter, and columnist for Daily Varietyin Hollywood.
McBride is also a veteran film and television writer whose decades of experience in the industry have brought him a Writers Guild of America Award, four other WGA nominations, two Emmy Awards nominations, and a Canadian Film Awards nomination. McBride was one of the screenwriters of the cult classic punk rock musical Rock ’n’ Roll High Schooland cowrote five American Film Institute Life Achievement Award specials for CBS-TV, honoring James Stewart, Fred Astaire, Frank Capra, John Huston, and Lillian Gish. McBride plays a film critic in Welles’s legendary unfinished film The Other Side of the Wind (1970-76), for which McBride cowrote his dialogue with Welles. McBride wrote the segment on war movies, War and Peace, for  100 Years . . . 100 Movies (American Film Institute/TNT), 1998, and co-wrote the 1982 United States Information Agency worldwide live television special in tribute to the Polish Solidarity Movement, Let Poland Be Poland. He is a member of the Writers Guild of America, the American Cinema Editors, and the Academy of Television Arts and Sciences, and he was a founding member of the Los Angeles Film Critics Association.
McBride co-produced the 1997 documentary Obsessed with “Vertigo”: New Life for Hitchcock’s Masterpiece and the 2002 documentary John Ford Goes to War. McBride was a consultant and interviewee for the documentary Becoming John Ford,released in 2007 as part of the Ford at Fox boxed set of DVDs, which won the “Film Heritage” award from the National Society of Film Critics and was chosen as “DVD of the Year” by Time magazine. McBride has made many appearances in documentary films and has done audio commentaries for numerous films on DVD. He plays a film critic in Orson Welles’s unfinished feature The Other Side of the Wind (1970-76). In 2011, McBride became the subject of a feature-length documentary, Behind the Curtain: Joseph McBride on Writing Film History, written and directed by Hart Perez.
McBride lives in Berkeley, California. His personal website is josephmcbridefilm.com. He also has a website for Into the Nightmare, intothenightmare.com.

The Broken Places is available to buy on