After Lizzie’s new boss, celebrity chef Armand, is stabbed in his own kitchen, Lizzie finds herself at the top of the suspect list.
Determined to clear her name she’s forced to enlist the services of her new neighbour, Celebrity Crimes Investigation Agency (CCIA) special agent Jack Mathis, who’s been suspended from his duties for reasons unknown.
Can Lizzie save herself from getting arrested and manage to resist her special agent sidekick’s considerable charms and gorgeous smile? Will they solve the culinary murder mystery or will she end up in a prison cell?
Murder On The Menu:
A Romantic Comedy Culinary Cozy Mystery
(A Celebrity Mystery Book 1) 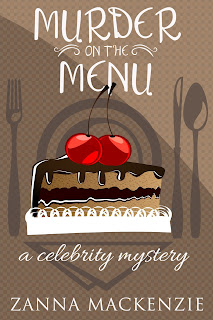 If you enjoy a cozy mystery with a celebrity murder, a little romance, lots of suspects, a challenging plot, likeable characters, set in a pretty English village -- then you're going to love Murder on the Menu.

When Lizzie leaves the bright lights of London to return to her roots in the quiet and quaint Cumbrian hills in the North of England she doesn't expect to be the main suspect in the murder of her celebrity chef boss Armand.  A boss who she dislikes intensely as he is a pretentious, loud, obnoxious bully.  But she was the last person to see him alive as she was working late on the night she was killed and, as she lives alone, she has no alibi.

Unless she finds the killer, Lizzie is worried that the police will charge her.  An ally, in the shape of her neighbour's brother, offers to help her.  But handsome Jack has been suspended from his special agent job recently -- why? Can she trust him?

Lizzie had a good job in London, lots of friends, so why did she leave all that behind?  And who was Adam and why is she avoiding his calls?

So many questions waiting to be answered in this cozy mystery and I absolutely loved it!

Lizzie is a likeable heroine and Jack is the guy with all the contacts who can look after himself, they made a fun and fabulous team that I'm looking forward to reading more about as the series progresses. 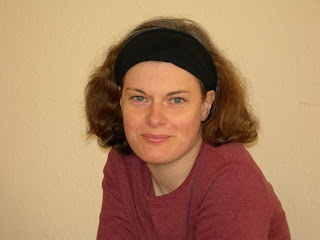 I write romantic comedy mysteries and when I’m not writing I can be found gardening (trying to grow tomatoes in the British climate is a major challenge!) walking the dogs or reading.
I’m a former therapist, a fan of the great outdoors – especially Scotland, the Lake District and Derbyshire’s Peak district – and also something of a dreamer!
Home is a village on the Derbyshire / Leicestershire border in the UK with my husband, our 4 Labrador dogs, a vegetable patch that’s home to far too many weeds and an ever expanding library of books waiting to be read.
At every opportunity I can be found scribbling down notes on scenes for whatever novel I’m working on and I love it when the characters in my work in progress novels take on minds of their own and start deviating from the original plot!
My website: www.zannamackenzie.co.uk
Find Zanna on social media
Twitter
Facebook
Goodreads
Amazon Author Page
Pinterest
Google+
Wattpad
Blog
Purchase Link –
Amazon