I'm delighted to be involved in the Blog Tour for Becoming Alfie, the first novel in a new series by Neil Patterson, with an exclusive extract 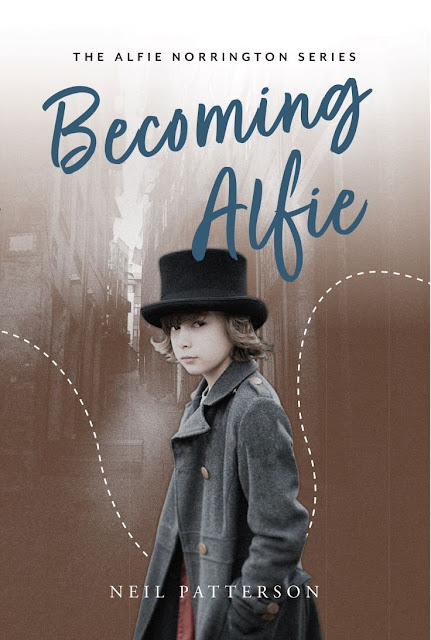 Alfie Norrington was born into poverty in London’s East End in the first minute of the twentieth century. His life was a battle. From the Brick Lane markets where young Alfie pilfered and pickpocketed, to the trenches of Flanders, Alfie fought every step of the way.

Almost killed by a trench bomb he battled to recover and while in a military hospital Alfie made a promise that dramatically changes his life. A true East End hero, Alfie begins his journey away from poverty armed with a robust moral compass and an open heart.

Becoming Alfie is the first in the Alfie Norrington series. It follows the life of a man who positively influenced thousands of people. The world needs more individuals like Alfie Norrington, that give much more than they take.

The following segment of Becoming Alfie occurs early in the book, at the start of chapter 5. Alfie has joined up to fight in Flanders, departing in a couple of days. He had also met a young woman and the following describes part of their first sexual encounter. Alfie was the student and Adeline the teacher in this respect. I hope you all enjoy this little read.

Alfie’s call-up papers were delivered six days later by the local postman, who could always be heard approaching as his tuneful whistling pierced the East End air. It was an anxious wait, as all those in the Cromwell Street tenement were living on an uncomfortable knife’s edge; that knife’s edge being Alfie’s departure, which was happening in just two days. That evening, the girls stifled their tears as they looked at Alfie from across the table where they all ate. Elsie was comforted by Tommy, whose style was down-to-earth and matter-of-fact.

“Well, Alfie lad, won’t be long now until you get to the front and give the ’un a bloody good hiding,” he said. “I was reading today that just over twelve percent of Tommies fighting at the front have been killed in combat, so your odds are really good.”

“I’ll give you twelve percent, you daft man,” said Elsie. “Look, you are upsetting the girls, so please shut up wiv the war. Can I get you another cuppa tea, Alfie love?”

“Yeah, you ’ave – going out every night for the past week, Alfie boy. Wot’s her name, wot does she look like?” chimed in Lily.

“Leave it out, girls, I’m just going training, then down the boozer afterwards for a couple,” said Alfie, with a smile he couldn’t conceal and a visible glint in his eye. “You’ll both be snorin’ by the time I get ’ome, like you are every night. Oh, and Rose, you know you talk in your sleep?”

Rose blushed. Alfie giggled as he put on his cap and coat and said, “I’ll be off. ’Ave a nice night – and stop that talking in your sleep, Rose, as you’re givin’ away all your secrets.”

With that he closed the door behind him, smiling to himself as he walked down the road to Adeline’s gaff.

It had been just over a week since Alfie met this beautiful young woman, who had quite simply mesmerised him. Apart from having a gorgeous face, lovely soft skin, a smell like a lavender patch and a warm heart, Adeline had deep black pools for eyes, like her sister’s, but much more unbelievably intoxicating. Alfie could easily get lost in them, and often did.

The first night that they met, they kissed. With her gentle manner, Adeline guided him in the art of kissing. It was an art she had perfected. Adeline tasted delicious to Alfie. He was quite content to let her be the master and he the pupil. The next night they kissed again until Adeline pulled away and said: “I know you like kissing, Alfie, and now I will guide you in kissing my body.”

She undid some buttons and allowed her dress to fall to the floor. Under it she wore nothing but a smile. Alfie wanted to devour her in one bite. She slowed down his ardour, gently coaching him in what to do with his hands and his mouth. Her body was magnificent. It felt like satin, smelled like beauty and looked just sensational. Alfie followed her instructions to the letter. “Gently kiss my neck and my back, gently now. Move down to my breast with your lips, and your hand down towards my nether regions, past the hair until – yeah, that’s it, Alfie, nice and gentle. Stroke my legs, that’s nice. Now look up at me. I want you to kiss everywhere, particularly – yeah, that’s it, Alfie, just there, that is so lovely. Use your tongue – that’s lovely – keep doin’ it, Alfie, keep going.”

Considering his total lack of experience up to this point, Alfie was more than willing to do as she said. He knew his enjoyment and Adeline’s enjoyment were linked.

“Let me take your clothes off, Alfie, as you are a little overdressed for what I have planned.”

“What do you have planned, you beautiful woman?”

Adeline bit her bottom lip, looking directly into Alfie’s eyes. “You’ll just have to wait, my lover, wait and see.” 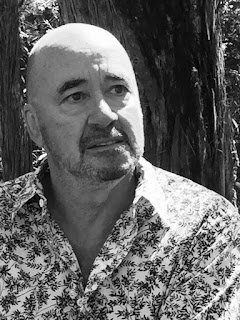 Born in South Essex close to the River Thames and directly East of London, my childhood was peppered with memories of the mighty river itself.

We would swim, fish and discover hidden treasure in the tidal mudflats with the fragments of clay pipes we found taking us back to another era. It was here that my inspiration for writing was born. I began to keep a diary of my observations from life and documented my feelings and thoughts.

My wife was twenty two and I was twenty four when we migrated to Australia with a glorious expectation. The sun was shining, the people were friendly and Sydney Harbour simply magnificent. Together we were committed to making the most of this opportunity beginning the next step in our lives. Everything was new which gave me endless writing opportunities that I recorded in my diary which had spilled over into a number of books. We travelled around this incredible country meeting people from all walks of life and from many nationalities. We lived and worked in a variety of capital cities enjoying each and every experience. All this was tremendous fodder for my writing.

I began to write short stories and poetry, none of which I sought to publish. By my fifty second birthday I was able to finish working and focus full time on my writing, the results so far are The Alfie Norrington Series with Becoming Alfie the first in the series of four. I hope that you enjoy reading Becoming Alfie as much as I did writing it. 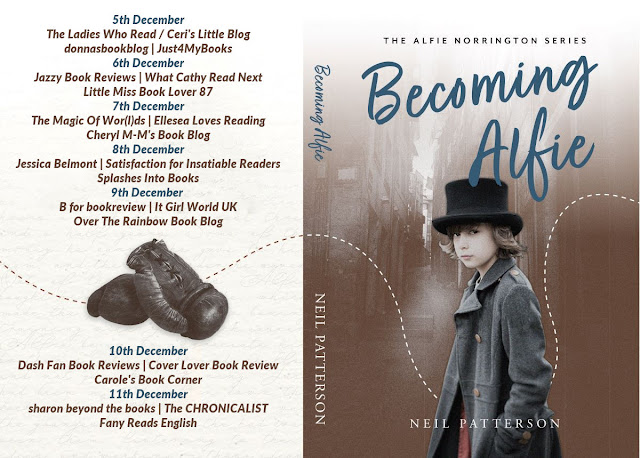