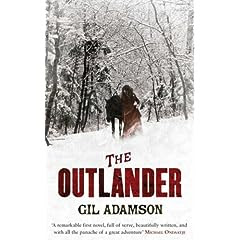 
The year is 1903 and 19 year old widow Mary Boulton is fleeing across the wilds of Canada from her 2 brothers-in-law who want revenge for the murder of her husband.

As Mary's wanderings take her deeper and deeper into the Canadian wilderness she encounters various people along the way who have their own reasons for being where they are. I couldn't help thinking of how unlucky she was before she became a widow and how lucky she was after, as more than once she was so near to starvation and exhaustion when she was found and helped on the road to recovery.

The widow followed her keeper .................. placing her boots where his had been, feeling the spongy give of forest floor. He pressed it far down, and she pressed less deeply. And when they had passed, their trail faded away again as moss and needles and leaves slowly uncompressed and tiny filaments stood upright.

This was an engrossing story of hope and faith in human nature. Gil Adamson's debut novel was shortlisted for the Commonwealth Writers Prize and I don't think it will be long before she wins an award if she continues to write with such remarkable assuredness.