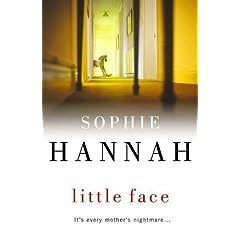 
Alice Fancourt returns home from her first trip out on her own after the birth of her 2 week old baby to discover her front door ajar, her husband just waking up from sleep and that her daughter, who she lovingly placed in her cot several hours before, has been unbelievably replaced by another baby. This sets the scene for an incredibly compelling and intelligent psychological thriller.

Why would anyone want to swap one baby for another? Could it be in any way connected to the murder of Laura, Alice's husband David's ex-wife a few years ago? And what about the domineering Vivienne, David's mother, is she as innocent as she seems? These are just some of the many questions to be answered by Simon and Charlie, the two detectives who's own fascinating insecurities and back stories could make a novel of their own!

Sophie Hannah's skilful writing had me hooked from the first page to the last as she gradually built up the suspense - all the characters seemed to be hiding secrets which were slowly revealed along with the subtle clues that I'd missed throughout the book!

I very rarely give books 5/5 but I feel that this book justifiably deserves it for the superb writing style, the peculiarity of the detectives, the very clever plotting and the excellent characterisations.