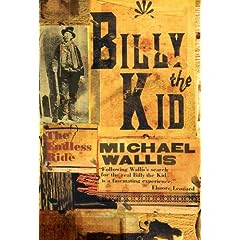 
BILLY THE KID: THE ENDLESS RIDE BY MICHAEL WALLIS

Just before the Civil War tore America asunder, a young boy named Henry McCarty was born. During his short life he acquired other monikers, including Henry Antrim, the Kid, Kid Antrim, the Wandering Kid, William H Bonney, Billy Bonney and El Chivato. Just months before his death he finally became known as Billy the Kid, really more of a title than a name and one that would last for eternity.

When Pat Garrett shot and killed Billy the Kid on July 14th 1881 in New Mexico Territory a legend was born.

From the corrupt streets of New York to the corrupt towns of the Wild West, Billy the Kid's 21 short years are brought vividly to life by this fascinating biography.

So few actual facts are known about him that historians do not even agree about his birthplace or even his real name. Michael Wallis has painstakingly sifted through all the exaggerated stories and outright lies that have surrounded him over the years and through a mixture of anecdotes from people who knew him, reliable sources, historical documents, and his own meticulous research, he has debunked many of the myths of his murderous ways and discovered that


"the truth of the young man was neatly covered up through sleight of hand with historical facts by a host of dime novelists, journalists, and hacks.......he was then and forever a mirage."

Some of the many surprising facts that did emerge are that Billy shunned tobacco and seldom drank, was literate (in fact there is documentary proof of a letter he had written), loved reading especially the popular 'dime novels' of the day, could speak fluent Spanish and loved singing and dancing, an appreciation that came possibly from his mother's Irish background.

Until his mother's death in 1874 when Billy was only 14, he was a normal mischievous boy. Afterwards he became a young man who had to fend for himself and grow up very quickly by living on his wits and eventually turning to horse stealing and gambling to live.

This is not just a history of Billy the Kid, but also a history of the Old West during the late 19th century, of the lawlessness and corruption during his short life, including the infamous Lincoln County War.

I particularly enjoyed the photographs dotted around the book, which included many of the characters and places mentioned, and the cover of the book shows the only documented photographic image of him, taken in late 1879 or early 1880. Paulita Maxwell, one of Billy's lady friends, said in later years, "I never liked the picture, I don't think it does Billy justice". The young man's image is forever frozen in time - just like his myth.

For more about Billy the Kid an excellent website can be found here.

Special Thanks to W.W. Norton & Co. for sending me this book to review.