Book Review: TOO CLOSE TO HOME BY LINWOOD BARCLAY 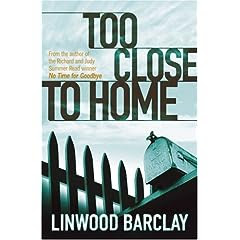 
TOO CLOSE TO HOME BY LINWOOD BARCLAY


Derek figured, when the time came, the crawlspace would be the best place to hide.


When the Cutters' neighbours, Mr and Mrs Langley and their young son Adam, are brutally murdered in cold blood everyone is shocked and when the police discover that 17 year old Derek Cutter was hiding in their house at the time of the killings he then becomes the prime suspect. His friend Adam's computer is missing; what has that got to do with his mother's boss; and could a young man's suicide somehow be linked to the novel that was on the missing computer? Did the killers go to the wrong address - should they have been looking for the Cutters house instead?

Derek's father, Jim Cutter, is determined to prove his son's innocence and it seems that everyone has secrets to hide, even Jim...........

This is the 2nd Linwood Barclay book I've read - his debut novel was No Time For Goodbye which was a Richard & Judy pick. This is very similar in many ways: it starts with a mystery and the reveal is very slowly and tantalisingly uncovered with twists and turns along the way. The main narrator, Jim Cutter, was incredibly likeable, honest, protective of his family, talked in mono-syllables, and did not suffer fools lightly; sounds like my kind of guy!

I always think that with these kind of books (suspense, mystery) that the reveal is never going to match up to all the build-up throughout the novel, and Too Close to Home is no exception. Don't get me wrong, I thoroughly enjoyed it, Linwood Barclay's fast writing had me hooked from the start, and I didn't guess the plot, but I just felt there was something missing and I'm not sure what it was!

However, if you enjoyed No Time for Goodbye or Sophie Hannah's books then I think you'd like this just as much.