If you're male an 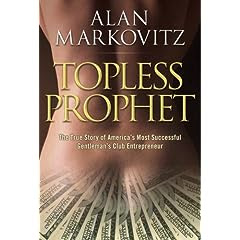 d reading this, I have a question for you - what would be your ideal fantasy life? How does having a string of 'Gentlemens Clubs' and being surrounded every night by beautiful near-naked dancing ladies, earning millions of pounds/dollars, driving fancy cars, owning your own private jet and racing car sound? If that life sounds too perfect and nobody could be that lucky, then think again and welcome to Alan Markovitz's world! His true story charts how he rose to become America's most successful Gentlemen's Club entrepreneur.
But, believe it or not there are drawbacks, like being shot at not once, but twice, and still having the bullet lodged in your neck between your carotid artery and your jugular vein as the surgeons considered it too risky to remove. Or maybe having your then business partner hiring two hitmen to murder you for your share of the nightclub. Or even having to testify against the Mob!


Early Life
Alan's father was a Holocaust survivor who was liberated from Auschwitz at 16 years and as he says "Maybe that's where I get it from - pluck, perseverance, determinations, balls, a little excess now and then. How else are you going to make it in this business?" His parents wanted him to be a doctor or a lawyer, the typical young-Jewish-guy-does-well-for-himself success story but Alan had other ideas, he saw how his neighbour, Sol Milan, owned a bigger car than his parents and he owned a strip club, and from an early age Alan knew that that was what he wanted.
So, Alan went to Bartender School and, luckily for him, when Sol's regular bartender wanted weekends off he asked Alan to step in, obviously he jumped at the chance and so began his first foray into the world of the 'gentlemens clubs'. When he was just 20 something he bought a run-down strip joint and with Sol as his partner he opened his first club - The Booby Trap - it was a dream come true and he never looked back.
The Shootings
The first person to shoot him was one of his own dancers, a junkie by the name of Susie who he had just fired. She didn't take too kindly to this and came back later the same night and shot her .38 revolver at him, hitting him twice, once in his liver and the other collapsed his lung. She only received two and a half years for attempted murder!


Amazingly, the next bullets were from an off-duty policeman who was apparently not happy at being asked to leave one of Alan's Clubs one January evening in 1997, having consumed too much alcohol and starting an argument with one of the dancers. After leaving he came back and started shooting his .40 caliber Glock and, unfortunately, Alan was in the way of one of his stray bullets. His jaw was shattered in six places, losing several teeth in the process, he had to have six separate surgeries, plastic reconstruction and cost him almost a quarter of a million dollars!
The Hitmen
The FBI was already investigating two thugs for other crimes when they listened in to their phone calls and uncovered a plot to assassinate Alan. Unbeknown to Alan, his business partner, Freddy Giordano, had hired the two hitmen to kill him, and Alan only found out about this while watching the evening news one night when they were arrested. Luckily for Alan they were arrested before they could carry out the hit!

The book takes us behind the scenes of how the business works, the girls who, Alan continually tells us, are not stupid but are doing something they enjoy and which can pay extremely well, his battles with officialdom, the vast sums of money that can be made, all the while saying that anyone with guts and determination can do anything if they want it badly enough.
Alan comes across as a likeable, decent guy, who has made mistakes in his life and admits them honestly, which is one of the things I liked about him. He wasn't flashy or pretentious, just an ordinary person living an extraordinary life. Even though I'm probably not the sort of person the book is aimed at ...... I'm a middle-aged female ....... I would guess the book is mainly aimed at males interested in 'gentlemens clubs' ........ but I really did enjoy it. I know I'll probably never find myself in one of these clubs, but that doesn't matter, I still found it a fascinating look at a different world.
The writing flowed quickly and easily and all the chapters were nicely divided into sections, eg. Tycoons are made not born and The Girls which is self-explanatory.
My Rating: 8/10
Published by Am Productions (Oct 2009)

Special Thanks to Tracee at pump Up Your Book Promotions and Alan Markovitz.