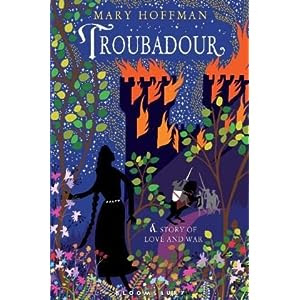 The story starts in France in 1208 when one of the main characters, Bertran, a troubadour, witnesses the murder of Pierre of Castelnau, one of the Pope's representatives, who has been visiting the Count of Toulouse. He knows that this could mean trouble. not just for himself. but for all the Pope's enemies and he tries to warn other heretics (like himself) who could be in danger from the Pope's revenge by travelling to the various towns and cities of Southern France.

The other main character, Elinor, a 13 year old noblewoman who is in love with Bertran, is also travelling through France with a troupe of minstrels in the disguise of a young minstrel boy. She runs away from her family rather than marrying an older man in an arranged marriage.

Mary Hoffman has woven an enchanting tale of love, poetry and music set against the backdrop of the invading army from the north.

I really liked the character of Elinor, the headstrong young woman, who was always at war with her mother when living at home and who had to grow up quite a lot during her journeys.

I especially enjoyed learning about the troupes of joglars; these were minstrels who wandered around to different towns entertaining the Lords and Ladies by composing poems and singing especially for them in their castles, or just singing in the marketplaces.

The easy flowing writing was a joy to read and, overall, I was absorbed in the story.

Special Thanks to Liz at My Favourite Books as I was lucky enough to win it in their recent book giveaway!