Book Review: LIZZI & FREDL: A PERILOUS JOURNEY OF LOVE AND FAITH BY DR WILLIAM B STANFORD 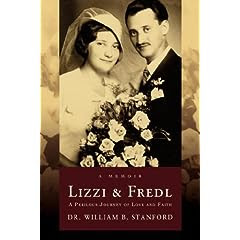 
LIZZI & FREDL: A PERILOUS JOURNEY OF LOVE AND FAITH by Dr William B Stanford

The author writes in the Preface:-

I wrote this book to honour my parents and their innumerable sacrifices and to share with the world how unconditional love and faith in God carried them through their darkest crisis.

In August 1938 Lizzi (26) and Fredl (27) Steiner were happily living in Vienna, Austria when papers arrived for Fredl from the Republic of Germany demanding that he report in a few days to an aviation factory in Munich to work on delicate timing devices for bombs. Fredl, a Master Jeweller, and a Catholic, had no intention of working for a madman and they decided that their only choice was to flee Austria ...... this novel is the story of their 7 year odyssey to freedom.

They first went to Paris to say with Fredl's niece but after just 3 weeks, they had to flee south as the Germans were getting nearer. This was just the beginning of their nightmare, of being moved from town to town while the Nazis were getting closer and closer.

They then lived in Rouen for 14 months before Fredl was told to report to a military camp for the French Army which turned out to be a makeshift internment camp at Lisieux. Meanwhile, Lizzi was sent to an internment camp in Orleans before being moved to Nevers. This was the first of many separations they had to endure as Fredl was moved around France to different internment camps and Lizzi was left alone to find a new job and a place to live, all the while they were both worrying about each other and trying to remain hopeful of being together again.

Each chapter alternated between Lizzi and Fredl so we knew what was happening to them both at the same time, which added another dimension to the story.

In March 1940 there was a mass exodus from Nevers to the south and Lizzi was lucky enough to travel in a truck with some deserting French soldiers to the town of Bergerac which was high in the mountains, and where she felt safe for a little while making friends and finding work. She realised that there were many people in the same difficult position as her, displaced from their native lands, displaced from their families and friends, displaced from normal life in general. They had such unknown futures.

They did keep in touch by letter throughout this time and Lizzi even managed to obtain a travel pass and visited Fredl in some of the camps.

As Lizzi uses her courage and strength to survive we follow Fredl from one internment camp to another as the years went on, and

"fear and distrust were emotions that needed to be heeded closely. Survival was of paramount importance, and misguided trust could prove to be fatal."

Even when Fredl was at his lowest ebb, desperately ill with heart failure and pneumonia, while in a labour camp at Saint-Sauveur, near Bellac, cutting trees in the freezing winter, the thought of Lizzi and the end of the war kept him alive and having something to aim for - they often talked of emmigrating to America and starting a new life - this was their dream.

We talk of being stressed today in our lives but what they had to endure must have been worse than anything I can imagine - they had to leave their family and friends behind, they lost their home and possessions, they never knew from one day to the next whether the Nazis would come and take them away, never trusting anyone - it was their strength and belief that carried them through such a terrible time.

This is an incredible and very moving story and throughout it all it is Lizzi and Fredl's love for one another that helps sustain them, and one that I found difficult to put down.