HIS OTHER LOVER BY LUCY DAWSON

When Mia discovers some text messages on her boyfriend's phone that suggest that he's having an affair, instead of confronting him, she decides that she's going to find out all she can about his other lover.  She finds that she can be just as deceitful as him as she delves into the other woman's life...........and in doing so she surprises herself by how many lies she can get away with.

I really enjoyed this dark chic lit novel.  Interesting characters, a good build up with some surprises.

According to Louise Candlish, best-selling author of Other People's Secrets:  "Funny, dark and very surprising - a compulsive new breed of chic-lit."

To read more about Lucy Dawson see her website.


THE PARTICULAR SADNESS OF LEMON CAKE BY AIMEE BENDER

On the eve of Rose's 9th birthday, while taking a bite out of her mother's homemade cake, she realises that she could feel her mother's emotions. From then on, every time she ate any food she knew exactly where the ingredients were made and the feelings of the person who cooked it.

My Review is here

Read what Estella at Estellas Revenge thought about it here


THE THOUSAND AUTUMNS OF JACOB DE ZOET BY DAVID MITCHELL 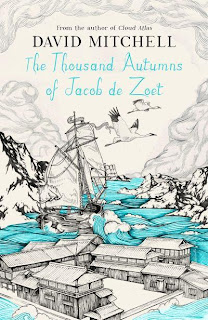 I also started listening to this Audiobook.

Set in Japan in 1799 it is the story of Dutchman Jacob de Zoet who intends to make his fortune in Japan before returning home to marry his fiancee, but when he meets the daughter of a Samurai his life takes a different turn.

I think the narrator, Jonathan Aris, is fabulous, he gives each character a unique and distinct voice, and how he manages to pronounce the difficult Japanese and Dutch names is beyond me!
Paula Wilcox (remember her from the TV series The Liver Birds?) is also excellent.

It is a very complicated plot with lots of different characters which I'm only just getting used to .... but I am enjoying it.