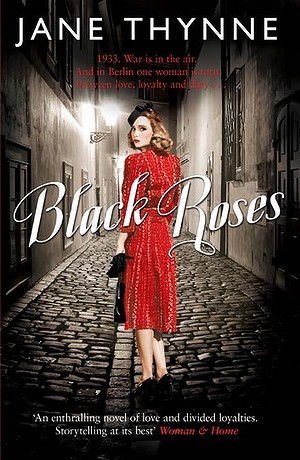 Clara Vine, a young, talented British actress, finds herself in Berlin and, unwittingly, in the midst of an uneasy circle of Nazi wives, among them Magda Goebbels.
There she meets Leo Quinn, an undercover British intelligence agent, and is soon recruited to spy on her new acquaintances.
But when Magda Goebbels reveals to Clara a dramatic secret and entrusts her with an extraordinary mission, Clara feels threatened, compromised and desperately caught between duty and love.

Set in 1933 Clara leaves England, and a boyfriend behind who expects her to marry him and to give up her dreams of being an actress, in search of a part in a new film called Black Roses.  Whilst at the film studios she meets two of Goebbels aides who invite her and another young actress to a party where they are then introduced to Magda Goebbels, a woman consumed by the drama of her own existence.  As Clara becomes more and more involved in the Nazi wives lives Magda takes a shine to Clara and starts to trust her.

The story starts with the death of a young girl who had fallen (or was she pushed) from a window.  This is an excerpt from early on in the book talking about the rise of the Third Reich and of Clara's situation.

Who could have foreseen how quickly things would change.  Even for Clara herself.  When she arrived in Berlin she could never have imagined what would happen in such a short space of time.  She could never have known how it would transform her.  All that mattered now, though, was that no one else should know.


As the story progresses we slowly learn the significance of her death. and of how far the Nazis would go in their quest for power.

I was surprised at how women were treated in the new Germany, frowned upon if they smoked in public, encouraged to marry, stay at home and have lots of babies, wear German designed fashion instead of French or Italian.  In contrast the Nazi wives and girlfriends wore gloves from Italy and handmade shoes from Florence.

I really liked Clara, though her family thought she was flighty, unreliable and irresponsible.  Even though she didn't enjoy the attentions of one of Hitler's brown shirts, she was persuaded by Leo, a British intelligence officer to spy on him and Magda Goebbels and, gradually, she felt her new identity emerge.

Overall I really enjoyed this book, though sometimes I thought there was too much attention to detail when I just wanted the story to move along at a quicker pace.

This is the first in a trilogy featuring Clara Vine - at the end of Black Roses there is a sneak peek at the second book, The Winter Garden, which was published in Feb 2014 - the story has moved on to 1937 Berlin. The Publishers have kindly sent me this book and I'm really looking forward to continuing Clara's new life as an actress and a spy!

Source:  From the Publishers in exchange for an honest review.