Guest Post/First Chapter Excerpt: THE WORLD BELOW BY MIKE PHILLIPS

I am delighted today to be bringing you the first chapter of The World Below, a Dark Fantasy novel, together with a guest post by author Mike Phillips

It’s a world of magic and intrigue. It’s a world of betrayal and death. It’s the World Below.
Things are finally looking up for Mitch. He’s had a rough time lately, suffering an accident that left him flat broke and physically deformed. But now he’s in a new town with new friends and a new job. He even met a nice girl. Mitch doesn’t know it yet, but she’s trouble in a big way. Strange things, inexplicable things, start happening. Soon Mitch is pulled into a magical world where he must rescue his girlfriend and save the enchanted people of the World Below.
Think of it as Twilight for guys. It’s a horror story with a sense of humor. It’s a romantic comedy with goblins. Like Mirror Mask and Night Circus, it’s crazy but a good crazy. If all that hasn’t scared you away, check out a great mess of a modern fantasy novel, the World Below.

The World Below
Chronicles of the Goblin King Book One

Hello everyone, and thank you for reading my guest post. My name is Mike Phillips and my new book is The World Below. I have been asked to talk about some of the more interesting characters in the book, the goblins.

In folklore and literature, goblins have always been evil creatures. To this day, goblins are hiding in our closets and under our beds. They are wicked monsters that are no happier than when they are burning fields or robbing cradles. Living on the fringes of society as they must to avoid camera phones and governmental laboratories, goblins lead harsh lives. Once they have been won over, goblins are the best sort of friends. They may have terrible manners, they may say awful things, they may smell bad, but we can all be that way sometimes. In the end, my use of goblins helps us see the best in humanity.

Writing about goblins was a riot! Goblins live on the fringes of human society. They make their homes in junk yards, abandoned buildings, sewer systems, and anywhere else people try to avoid. Once they find a likely spot, the get to work. Goblins are clever with tools and machinery. They will use and repurpose anything they can get their hands on, so many of their dwellings look like they were designed by frat-boys. Not always the best of neighbors, goblins have to take security seriously. They construct elaborate pitfalls to keep themselves safe from enemies like collapsing tunnels, pongee pits, and mechanical traps.

Goblins, like their human counterparts, each have a unique personality. They live in what they call crews, a sort of family, a lot like college dorm-mates. Each goblin has a special skill. One might be a bully (a most desirable skill in the goblin world). Another might be crafty at making traps. Some use sorcery or poison. Others are good at machinery. Some just eat a lot (another desirable skill). Goblins, in general, have a loose sense of morality. If it doesn’t hurt another member of the crew, with the obvious exception of fighting, then it’s usually okay. Fighting is always acceptable behavior, though if an enemy is around, a goblin is expected to stop fighting the other crew member and start fighting the enemy. Common sense rules like that are the cornerstone of goblin society.

That brings us to the topic of goblin social structure. Goblin society is feudal. They organize in crews, bound by familial ties or friendship. These associations are loosely formed, and if a goblin wants to go it alone, no one holds a grudge. A crew may have two or three leaders at a time. It is not unusual for goblins to disagree, so sometimes they have no real leader at all. Though they fight with each other like crazy, but they are deeply loyal in times of trouble and would do anything for the other members of their crew. No female goblins appear in The World Below, but that is a topic for another time.

People have been asking how to make friends with goblins, so I thought I’d wrap things up by talking about that. Goblins are monsters, after all. To begin with, don’t look like a victim. They are predators. If you run they will chase you down. The secret to making friends with goblins is not to treat them like animals. They won’t be trained and can’t be suckered. Think of them as that particularly feisty aunt that always speaks her mind. So if you want to make a goblin your friend, it’s best to start with an act of kindness. Goblins have hard lives and even a small act of kindness means a lot to them. In the book, Mitch does a favor for a goblin without even knowing it. In turn, the goblin rescues Mitch from a pan dimensional, man-eating dumpster. Friends like that are hard to find!

Thank you so much for joining me. I hope you enjoy The World Below. Please visit me at mikephillipsfantasy.com.

Mike Phillips grew up on a small farm in West Michigan, living much the way people did at the turn of the century. Whether it was growing fruits and vegetables or raising livestock, Mike learned the value of hard work and responsibility at a young age.

While his friends spent their summers watching reruns of bad sitcoms, Mike’s father gave him a very special gift. He turned off the television. With what was affectionately referred to as “the idiot box” no longer a distraction, Mike was left to discover the fantastic worlds that only exist in books. When not tending sheep, gardening, building furniture, chopping wood, or just goofing off, Mike spent his time reading.

With all that hard work at home, Mike was always eager to go to school. He excelled as a student and went on to pursue a career in the sciences. Working as a Safety Engineer in the Insurance Industry, Mike soon became bored with the corporate grind. Writing engaged him like nothing else. After a few novels and numerous short stories, he thought getting published would be a pretty neat idea. And so, here it goes…

Mike Phillips is author of The World Below and Reign of the Nightmare Prince. His short stories have appeared in ParAbnormal Digest, Cemetery Moon, Sinister Tales, Beyond Centauri, the World of Myth, Mystic Signals and many others. Online, his work has appeared in Lorelei Signal, Kzine, Bewildering Stories, Midnight Times, and Fringe. He is best known for his Crow Witch and Patrick Donegal series. Please visit Mike at mikephillipsfantasy.com. 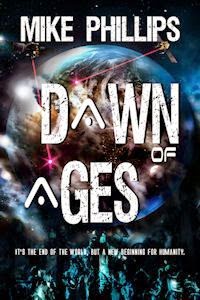