I am thrilled to be today's stop on the Winter Siege blog tour .....

1141.  Gwil, a battle-hardened mercenary, watches from the icy reeds as a little girl with red hair is attacked by his own men.  He is powerless to stop them.

But a strange twist of fate brings them together again.  Sheltering in a church, he finds the girl freezing cold, close to death, clutching a sliver of parchment.  And now he is certain of what he must do.

He will bring her back to life.  He will train her to fight.  And he will protect her from the man who calls himself a monk, who lost a piece of parchment he will do anything to get back.

But danger looms wherever they turn.  As castle after castle falls victim to siege, the icy Fens ring with rumours of a madman, or murder - and of a small piece of parchment with a terrible secret to tell, the cost of which none of them could have imagined ......

An epic account of the brutal winter when Stephen and Matilda tore England apart in their battle for its crown - when atrocities were inflicted on the innocent, but bravery found a home in an old soldier and a young girl. 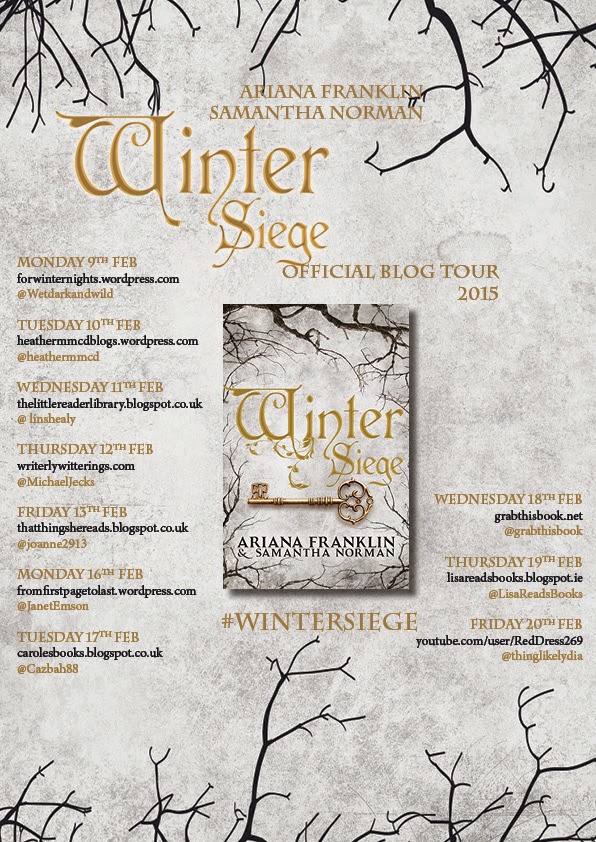 I read Ariana Franklin's first book in the Mistress of the Art of Death series and loved it.  You can read here what I thought about the novel.  Sadly, Ariana passed away before she could finish Winter Siege but her daughter, Samantha Norman, decided to try and finish what her mother started, hence this novel!

I think she's done a fantastic job in telling the story of an England torn apart by Matilda and Stephen and of how ordinary people were caught up in their conflict.

The ordinary people in this story were Gwil, the mercenary, seeking redemption from God for the terrible deeds he has carried out in his past, by helping the young girl who he names Penda, as she can't remember her own name due to her horrific ordeal, an ordeal which, thankfully, she can't recall, she just knows that something terrible happened to her.

We also meet sixteen year old Maud of Kenniford Castle, forced to marry a much older man, a marriage of convenience to stop Matilda passing through the castle and lands of Maud, a land she had ruled since her father's death when she was eleven.  But powerful men's allegiances changed as easily as the weather in those days.

Their lives will intertwine ....

I cared about all the characters, Gwil was a good man, Penda was full of revenge and, to her and Gwil's surprise found that she was an excellent archer, and Maud, who had a shrewd mind and was sharp and intelligent.

I thought the storyline was really compelling, it really brings the era of twelfth century England to life, it was lovely to see how Penda's confidence grew throughout the novel, this is a tale of treachery, murderous atrocities, but also a story of courage and love during a terrible time in England's history.

Thanks to Naomi at Transworld for letting me be a part of this blog tour.
To read an extract from the book check out The Little Reader Library

Ariana Franklin was born in Devon and, like her father, became a journalist.
Having invaded Wales dressed in combat uniform with the Royal Marines for one of
their military exercises, accompanied the Queen on a royal visit, missed her own twenty first birthday party because she had to cover a murder, she married, almost inevitably,
another journalist. She then abandoned her career in national newspapers and settled
down in the country to bring up two daughters, study medieval history and write.

Ariana was the author of the acclaimed, award-winning Mistress of the Art of Death
series. She passed away in 2011, before she was able to deliver the manuscript for Winter Siege. Her daughter, Samantha, decided to complete the novel on her mother’s behalf.

Samantha Norman is a journalist and broadcaster who is mad about horses. She lives in west London with her two sons Harry and Charlie, and their dogs Becks and Spider.