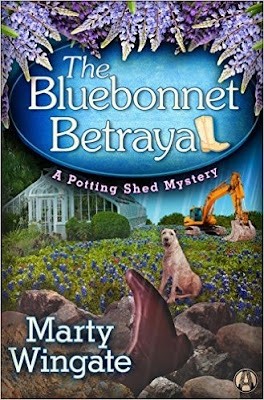 Bestselling author Marty Wingate “plants clever clues with a dash of romantic spice,” raves Mary Daheim. Now Wingate’s inimitable gardening heroine, Pru Parke, is importing a precious bloom from Texas—and she won’t let a vicious murder stop her.
Pru’s life in England is coming full circle. A Texas transplant, she’s married to the love of her life, thriving in the plum gardening position she shares with her long-lost brother, and prepping a Chelsea Flower Show exhibit featuring the beloved bluebonnets of the Texas hill country. Technically, Twyla Woodford, the president of a gardening club in the Lone Star State, is in charge of the London event, but Pru seems to be the one getting her hands dirty. When they finally do meet, Pru senses a kindred spirit—until Twyla turns up dead.

Although Twyla’s body was half buried under a wall in their display, Pru remains determined to mount a spectacular show. Twyla would have insisted. So Pru recruits her husband, former Detective Chief Inspector Christopher Pearse, to go undercover and do a bit of unofficial digging into Twyla’s final hours. If Pru has anything to say about it, this killer is going to learn the hard way not to mess with Texas.

The Bluebonnet Betrayal is the fifth in the Potting Shed Mysteries and I've loved every one of them.  I love Texan Pru and her determination, she doesn't give up in her pursuit of justice.

This time she's asked to be a sort of liaison with the designer and contractor at the Chelsea Flower Show until the Austin Rock Garden Society turn up, they can't get there in time for the first day of build up.  But when they arrive and one of them is murdered straight away Pru can't help digging for clues, with the help of her hubby Christopher who goes undercover this time.

When Pru's not building stone walls, fitting tarpaulin sheets and struggling to get the garden ready in time for the opening, she's trying to discover who killed one of their members but she also finds there was some tension within the society and tension within the garden crew over the Texan Bluebonnets too.

The Chelsea Flower Show was a super setting for the story, I really got a feel of what goes on during the build up to this famous show.  I thought the plot was excellent, I didn't guess whodunnit, there were many suspects and, as usual Pru gets herself into trouble with several of the main characters, including the police!

I particularly enjoyed Christopher's involvement and these were the fun elements of the book for me. I won't give too much away but I think regular readers will like this part.

Although this is the fifth in the series, it can be read as a standalone.

Check out my thoughts on the earlier books: 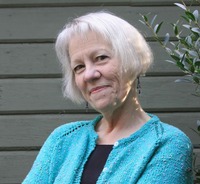 Marty Wingate is a Seattle-based writer and speaker who shares her love of Britain in her two mystery series. The Potting Shed books feature Pru Parke, a middle-aged American gardener transplanted from Texas to England, and Birds of a Feather follows Julia Lanchester, bird lover, who runs a tourist office in a Suffolk village. Marty writes garden articles for magazines including Country Gardens and the American Gardener. She is a member of the Royal Horticultural Society, Mystery Writers of America, Sisters in Crime, and the Crime Writers Association. She leads garden tours to England, Scotland and Ireland, spending free moments deep in research for her books. Or in pubs.