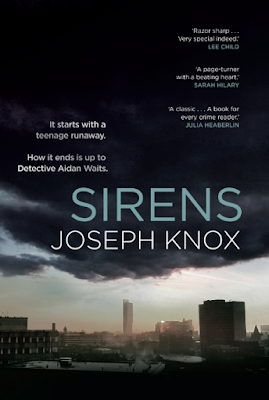 It starts with the girl. How it ends is up to DC Aidan Waits.

Isabelle Rossiter has run away again.

When Aidan Waits, a troubled junior detective, is summoned to her father’s penthouse home – he finds a manipulative man, with powerful friends.

But retracing Isabelle’s steps through a dark, nocturnal world, Waits finds something else. An intelligent seventeen-year-old girl who’s scared to death of something. As he investigates her story, and the unsolved disappearance of a young woman just like her, he realizes Isabelle was right to run away.
Soon Waits is cut loose by his superiors, stalked by an unseen killer and dangerously attracted to the wrong woman. He’s out of his depth and out of time.

How can he save the girl, when he can't even save himself?

Sirens is set in Manchester, a city I know reasonably well, but this is the side of the city that is a world away from the bustling streets, smart office blocks and trendy shops.

This is the dark, dirty, seedy side where Sirens glide from club to club collecting money and carrying drugs.....these are beautiful young girls who entice their victims before vanishing into the night.

Into this murky world enters disgraced detective Aidan Watts, himself no stranger to drugs, who has recently had three strikes against him - the last one for taking seized cocaine and swapping it for talcum powder.  He's no hero but he's not all bad either.  He rarely sees daylight, preferring to watch the city at night and trusts nobody.  But he's also clever and astute and, even at his lowest, his mind is still sharp and strong.

Along the way he meets an odd assortment of weirdos, some of whom I still have nightmares about. This is not for the faint-hearted, with strong language and violence.

The writing was so descriptive, a brilliantly conceived story, with bent police officers, beautiful and vulnerable young women, slimy characters, manipulative politicians, all mixed up in a city of damaged souls.

A TV series in the making, Sirens is a compelling, page turner that makes you glad you can turn the last page and get back to a normal, cosy life in the daytime ...... but part of me wants to go back to that nighttime underworld of drug dealers, lies and deception ...... I can't wait to see what Aidan Watts gets involved in next time!

A brilliant debut novel by a rising author in Joseph Knox.  Remember the name.

Sirens is available to buy from Amazon UK - Amazon US - BookDepository