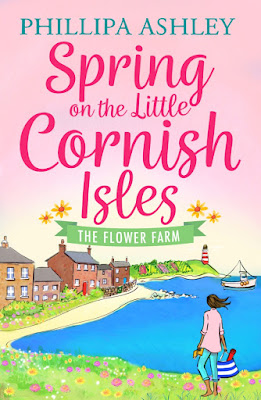 Today it's my turn on the blog tour for Spring on the little Cornish Isles: The Flower Farm (Book 2) and I have an exclusive extract for you

Jess has lived at the idyllic flower farm on the Isles of Scilly her whole life, but when her boyfriend Adam leaves without explanation, Jess discovers that even her little slice of Cornish heaven can be lonely.

For the first time in Will’s life, he’s met someone he can’t stop thinking about. But nothing is simple when the woman of your dreams is working for you.

Gaby is running away from painful memories, and where could be more perfect than a remote island off the Cornish coast? But to put the past behind her, she must keep moving … however much she might want to stay.

Nothing is simple, even on paradise. Will love bloom for the residents of the little Cornish Isles? 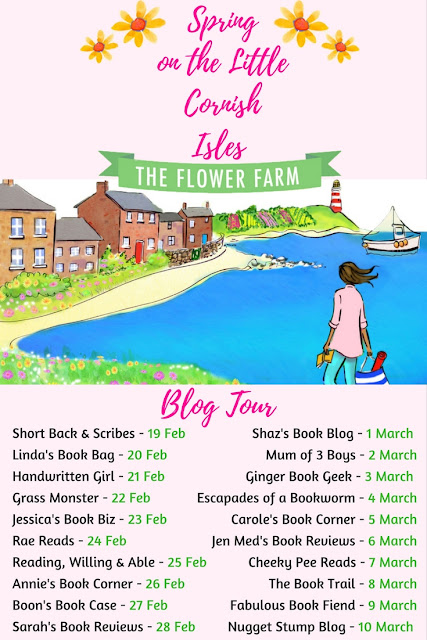 With his rowing in the summer and rugby in the winter, plus the farm, her brother’s life seemingly was a full one. There hadn’t been much time for relationships, although he had dated a few women over the years. The longest lasting one had been with a Belgian woman who’d come to work in the ferry office in Hugh Town. She’d decided to go back to Ghent to study, so that had been the end of that. Will had wandered around in a gloom for a week or two but soon snapped out of it when rowing season started in the spring, so Jess had suspected he wasn’t too heartbroken.
Since then, he’d managed to acquire a reputation for being an impossible catch and even though he’d had a couple of flings with temporary visitors to the islands, he didn’t seem to have fallen hard for anyone special. That wasn’t so unusual because finding a partner among a small and ever-changing community was difficult in itself, not to mention when you were very busy and tied to a business, as Jess had also discovered over the years.
Before Adam, she hadn’t had the best romantic track record herself. A couple of flings that had fizzled out; one with a doctor who’d inevitably left to further his career on the mainland, and one with a policeman: ditto.
She counted herself incredibly lucky to have met Adam. She knew that moving in to his place was on the cards and she was looking forward to making a life together, and fingers crossed, having a family of their own one day.
And then Jess thought of her best mate, Maisie Samson. They’d been friends since their schooldays, although Maisie was a few years older. All the children from the smaller isles boarded at the high school on St Mary’s because it was too disruptive for them to constantly travel back and forth on boats every day. Maisie had taken Jess under her wing in the first year, and during the holidays when she’d returned from sixth form college on the mainland. As Jess grew up, they’d become firm friends.
Jess had supported Maisie through some dark times lately. Maisie had miscarried her previous pregnancy the Christmas before last. Far from being supportive, especially as Maisie has found it difficult to fall pregnant in the first place, her ex-boyfriend, Keegan had left very soon after, saying he couldn’t handle having children anyway. Keegan also happened to be Maisie’s boss at the brewery chain where she worked so after the trauma of losing her baby, Maisie had decided to come home to Scilly and help her parents run the Driftwood. How must she now feel, seeing her best friend, Jess, and Adam loved up? How would she react when Jess told her she would be moving in with Adam? And how would she feel when, hopefully, she and Adam had kids? Maisie would put on a brave face because she was a good friend, and Jess hoped that Maisie would find someone as sexy and just-plain-lovely as Adam, and they could all enjoy their families together. They could have their own little gig crew one day … well, you never knew. Miracles could happen.


But this wasn’t getting the cardboard ordered, and giving herself a stern talking-to, Jess refocused. Ten minutes later, she pushed away the keyboard in triumph and turned to the boys. ‘There. Done and dusted, fingers crossed.’