The Summer Will Come by Soulla Christodoulou - Blog Tour Extract 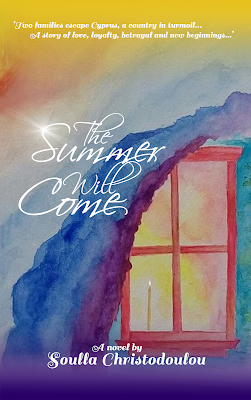 
Set in the 1950s, the story begins in Cyprus. EOKA, British rule, and the fight for Enosis (unity) disrupt the world of two Greek Cypriot families, living in different villages on the island. They are desperately trying to cope with the unpredictability of this fractious time. Circumstances over a five-year period push both families to escape to London where, as immigrants, they struggle to settle, face new challenges, trauma and cope with missing their homeland's traditions and culture. Both families' lives cross paths in London and it seems that happier beginnings could be theirs. But at what cost?
A story of passion for a country in turmoil, family love, loyalty and treachery and how, sometimes, starting over isn't always as imagined. 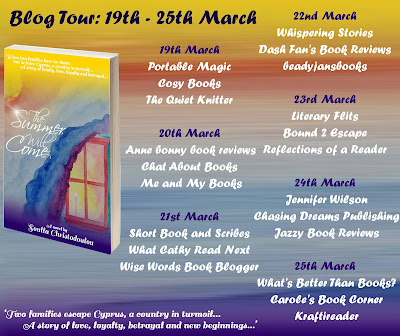 
Her boss eventually came out of the office slamming the door behind him, rubbing his big hairy hands together.
‘So you think you can be late now you’ve been working for me a while, eh?’
‘No not at all…I wasn’t well.’
‘Well you look well enough to me.’ A combination of halitosis and acrid sweat made her heave and she visibly recoiled.
‘Sorry. It won’t happen again.’
‘No it won’t. Or that daughter of yours and you will be outta here.’ He moved a step closer towards her and she felt his thigh against her arm. She shivered. ‘Anyway enough about work. I wanted to spend some time with you. You’re a fine woman and you’re never here alone.’
‘Well I have to go now if that’s all. Dinner won’t cook itself.’
‘Talking of dinner, I’m rather hungry…’
‘My husband will be home soon so I can’t be late.’
‘Oh I know all about your husband…he’s not even around is he?’
Evangelia peered at him. His pupils, menacingly black, pierced her. She pushed back her chair and made to get up from behind the sewing machine. She stumbled slightly as the chair tipped back and she tripped on the front leg. He reached out for her; his grip tighter than was necessary.
‘Thank you,’ she said, her head spinning worse than ever.
‘If you really want to thank me, there’s something else you can do.’ Before Evangelia took in the situation he pushed her round and forced her over the sewing table. He pulled at her skirt and ripped her knickers down below her knees. He held onto her hair and pulled her head back as his urgent rough thrusting burned her. Her head thumped as she struggled to focus, her vision blurred. Her legs took root to the cheap linoleum floor, stiff with pain. It was over within a few minutes. She didn’t stop him. She didn’t scream out. She couldn’t find her voice.
‘Didn’t realise you’d make it this easy.’ He stood close, too close. His words grazed her cheek as sharply as if a knife edge scraped over it. She didn’t look at him. She didn’t move. She heard him pull the zipper on his trousers. The sound invasive, physically painful. She followed his footsteps across the factory floor to the office.
Terrified he would return she still didn’t move. She didn’t know how long she stayed there for but eventually her legs gave way; she dropped to the floor. Shaking, she pulled at her skirt to cover herself. A burning sensation gripped at her. Her insides tangled, twisted, knotted. There was blood running down the inside of her leg. She watched it, mesmerised by its lucid vigour. Then it trickled dry and into nothing, staining her leg a smudgy brown. She edged her knickers over her feet and scrunched them in her hand. Her knuckles white with anger.
A loud banging at the main doors startled her. She recoiled. Conscious of her state of undress; not wanting to be seen. She crouched behind the sewing machine gripping the back of the chair for support. Her legs still trembled beneath her, threatening to give up on her.
‘No, I’m still here.’
‘Well move aside…let me in…’ She heard a man’s voice. She didn’t recognise it.
‘Not now…you know how it is…extra perks of the job.’
‘You dirty dog.’
‘Don’t tell the wife.’
‘Nothing to do with me. Leave you to it.’
‘Thanks mate.’
‘Will call back tomorrow. Want all the money you owe me.’
‘Yeah sure. Counted out on my desk already.’ She listened, too scared to breathe, as the door slammed shut and seconds later a car back fired outside in the courtyard before noisily screeching off. The engine noise echoed around the four walls of the inner courtyard and rang around in her ears bringing on the nausea again. She heard her employer cough, clear his throat. He called over to Evangelia.


‘Call it a night luv. See you on Monday. Oh and this is our little secret.’ Acid bile strangled her throat and she gagged, retching over the floor. Sick spattered two rolls of fabric and a bundle of zippers dumped next to her machine. 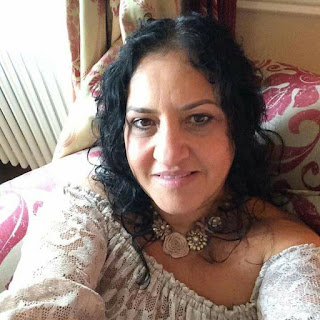 Born in London to Greek Cypriot parents Soulla Christodoulou spent much of her childhood living carefree days full of family, school and friends. She was the first in her family to go to university and studied BA Hotel & Catering Management at Portsmouth University. Years later, after having a family of her own she studied again at Middlesex University and has a PGCE in Business Studies and an MA in Education.
Soulla is a Fiction author and wrote her first novel Broken Pieces of Tomorrow over a few months while working full time in secondary education. She is a mother of three boys.
She is a compassionate and empathetic supporter of young people. Her passion for teaching continues through private tuition of English Language and Children’s Creative Writing Classes as well as proof reading and other writing services.
Her writing has also connected her with a charity in California which she is very much involved in as a contributor of handwritten letters every month to support and give hope to women diagnosed with breast cancer. One of her letters is featured in a book ‘Dear Friend’, released on Amazon in September 2017.

When asked, she will tell you she has always, somewhere on a subconscious level, wanted to write and her life’s experiences both personal and professional have played a huge part in bringing her to where she was always meant to be; writing books and drinking lots of cinnamon and clove tea!

She also has a poetry collection, Sunshine after Rain, published on Amazon and The Summer Will Come is her second novel. She is currently working on a third novel Trust is a Big Word about an on-line illicit relationship that develops between two people.
Social Media Links –
Website
Author Media Kit
Twitter
Instagram
Facebook
Pinterest
Scriggler