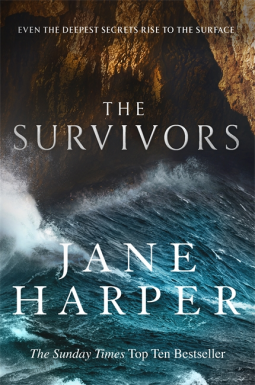 The Survivors
by
Jane Harper
Publication Date:  21 January 2021
Publisher:  Little, Brown
Synopsis:
Kieran Elliott's life changed forever on a single day when a reckless mistake led to devastating consequences. The guilt that haunts him still resurfaces during a visit with his young family to the small coastal town he once called home.Kieran's parents are struggling in a community which is bound, for better or worse, to the sea that is both a lifeline and a threat. Between them all is his absent brother Finn.When a body is discovered on the beach, long-held secrets threaten to emerge in the murder investigation that follows. A sunken wreck, a missing girl, and questions that have never washed away...
My Thoughts:
Jane Harper has done it again!  She has conjured up another amazing psychological thriller that kept me gripped to the end.
I have read and loved all her books and I think The Survivors is one of her best.  She is so adept at small town dynamics.
The Survivors is told through Keiran's eyes and I enjoyed this style of writing, getting to know him and his thoughts but not of the townspeople, so this kept me guessing as to what they were really thinking and what they actually knew.
A story of secrets of long ago, writing that really draws you in and doesn't let go until every last secret is revealed, shocks and surprises, all excellently written with such depth.  I can't wait to see what Jane Harper does next!
Read my thoughts on the other books
The Dry
Force of Nature
The Lost Man
My thanks to publishers Little, Brown for giving me the opportunity to read The Survivors.
Available to buy now from
Amazon UK
Amazon US