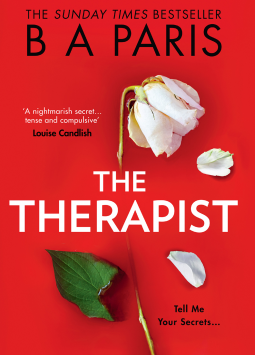 When Alice and Leo move into a newly renovated house in The Circle, a gated community of exclusive houses, it is everything they’ve dreamed of. But appearances can be deceptive…

As Alice is getting to know her neighbours, she discovers a devastating, grisly secret about her new home, and begins to feel a strong connection with Nina, the therapist who lived there before.

Alice becomes obsessed with trying to piece together what happened two years before. But no one wants to talk about it. Her neighbours are keeping secrets and things are not as perfect as they seem…

My Thoughts:
The Therapist is one of my favourite books of this year.
It's creepy and unnerving in parts, the writing is compelling, and I really didn't know who to trust, who to believe.
The girl who used to live in Alice's house was called Nina and Alice becomes obsessed with her as her own sister was also called Nina.
Some of the situations Alice's finds herself were a little bit scary as I was reading it on my own at night, and I wondered if Alice's mind was playing tricks on her.  This was typical of the way the story was written, it kept me questioning everything and everyone.
The pacing was perfect, the characters were believable, there were secrets and lies, it was tense and twisty, and the overall story kept me glued to the pages.
Definitely one to recommend!
Thanks to Harper Collins for giving me the opportunity to read this book.
Available to buy now from ~ Amazon UK
Check out all the other bloggers on the tour