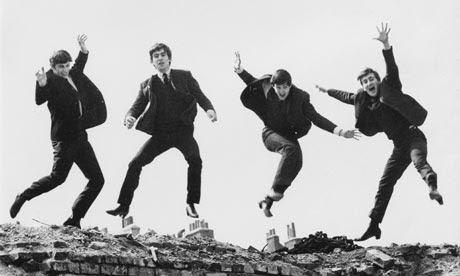 Paul McCartney, John Lennon and George Harrison are starring as zombies and Ringo Starr as a ninja in the latest addition to the publishing's hottest, and oddest, new craze: the monster mash-up.

Alan Goldsher's Paul is Undead: The British Zombie Invasion has been snapped by US publisher Pocket Books for publication in June next year, following in the footsteps of the surprise hit Pride and Prejudice and Zombies, which was published this spring, and the forthcoming Sense and Sensibility and Sea Monsters, Queen Victoria: Demon Hunter and I Am Scrooge: A Zombie Story for Christmas, all out this autumn.

Goldsher's story starts in a Liverpool maternity ward in 1940, as a newborn Lennon is bitten by a zombie and doomed to wander the Earth for eternity. When he meets McCartney in 1957 he "bites off Paul's ear and sucks out his mate's grey matter, after which he spits a healthy amount of his own brain into Paul's carotid artery - and thus is born the greatest songwriting team in rock history," according to Goldsher's version of the encounter.

Harrison is quickly zombified, and "seventh level Ninja Lord Ringo Starr" is then welcomed into the fold. The Beatles enslave "hundreds of lusty teenage girls", invade the US where they mind-meld millions, releasing albums with hidden messages such as "Please please me by biting your young", "Dear sir or madam, won't you eat your neighbour", and "All you need is eternal life".

Their world begins to crumble when Lennon starts to date eighth level Ninja Lord Yoko Ono, and a band called the Zombies – whose members, Goldsher says, are not actually zombies - seeks revenge.

For those who are less than enamoured of the new trend, however, there is some relief: Goldsher's literary agent, Jason Ashlock, is unconvinced of its staying power, telling the New York Observer that "this monster mash-up craze can only last so long". "We chose this idea because it was inventive enough with the Beatles element that it could outlast what might not be a long-lasting trend," he said. "We were trying to think of something that wouldn't just be cool next year, but would continue to sell as an interesting item for many years to come."