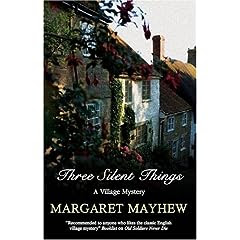 When the retired Colonel moves to the picturesque Dorset village of Frog's End after his wife's death he expects to live out his days quietly, but when, on collecting for 'Save the Donkeys' Charity he discovers the body of Lois Delaney (an aged actress) his life becomes anything but quiet and boring.

At the Inquest into her death it is presumed that she committed suicide but the Colonel (who was a huge fan of hers) has his suspicions that all was not as it seemed and he does his own investigating. He discovers that Lois Delaney had just been offered a wonderful acting job on the London stage and was very excited about it - so why would she commit suicide when she was so happy? It just didn't make sense to the Colonel.

Set in a contemporary era, the small village is fully of quirky characters and we are introduced gradually to all of them.

There is the nosey neighbour, Freda Butler, who uses her late Admiral father's binoculars to spy on all the comings and goings ......... the two gay men living in the converted Hall which has been made into flats, one of which is where Lois Delaney lived ......... the sour old biddy, Miss Quinn, who also lived in the flat above. Plus an assortment of oddballs and even some normal inhabitants!

We also learn that many people in the village even knew Miss Delaney years ago when she was an actress, so do any of them have a motive to murder her? And why have they kept it quiet that they knew her?

The author, Margaret Mayhew, throws in a few red herrings here and there just to keep us guessing which all added to the enjoyment.

As we get to know the likeable Colonel and the villagers the plot moves very slowly and gently with not a lot happening but I was swept along and had finished it all too soon! At only 180 pages long it is a nice easy read.

If you enjoy Miss Marple or the Midsommer Murder type of story then you'll like this. But if you're the Harlen Coban or Lee Child fast and furious type of storyline fan then I think this will move too slowly for you.