Book Review: ADMIT ONE: MY LIFE IN FILM BY EMMETT JAMES 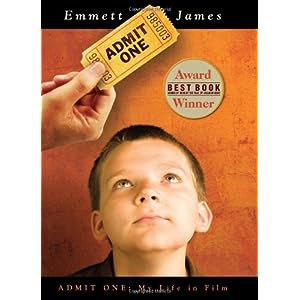 
ADMIT ONE: MY LIFE IN FILM BY EMMETT JAMES

When Emmett James was growing up in the 70's and 80's the weekly family outing to the local cinema was his escape from the grimy streets of Croydon, South London into another world.

At the beginning of each nice and short chapter a different film is mentioned and he describes how the flickering images on the big screen affected his growing up.

Career plans and life-altering directions throughout my childhood years were consistently dictated by the cinema and my favourite film at the time. I went from praying that I grew up to be a mouse after the highly emotional and utterly disturbing animated Disney film The Rescuers, to being sure my destiny was now in the field of archaeology after seeing Indiana Jones and the Temple of Doom.

He also dreamed of one day starring in one of the films; for most of us, these are just daydreams and real life takes over but for Emmett James he really does go to Hollywood and he really does fulfil his lifelong dream, eventually having a role in the biggest grossing film of all time (at least it was when he wrote this book!).

I thought that Emmet James dry and wry humour made for entertaining reading and I read this book quite quickly. My favourite story describes how he gatecrashes an Oscars party by pretending to be Richard Curtis (the writer of Four Weddings and a Funeral), who at that time was relatively unknown and no-one knew what he looked like!

From The Jungle Book to Titanic and all manner of genres in between, if you love films you'll love this!