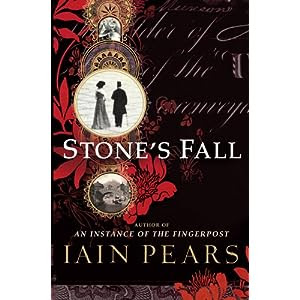 Iain Pears tells the story of John Stone, financier and armaments manufacturer, a man so wealthy that in the years before World War I he was able to manipulate markets, industries and indeed whole countries and continents.
A panoramic novel with a riveting mystery at its heart, Stone’s Fall is a quest to discover how and why John Stone dies, falling out of a window at his London home in 1909.

The novel is recounted by three different narrators and begins in 1953 in Paris, when Matthew Braddock, a retired journalist, attends the funeral of an elderly lady that he knew several years ago in London. When her solicitor approaches Braddock and informs him that there is a package for him in London only to be opened on her death the story becomes even more intriguing.

Whilst travelling back home his mind goes back in time to London in 1909 when the widow of John Stone employs him to discover more about the contents of his will and thus he becomes the first narrator.

Another narrator takes up the story in Paris in 1890 and finally John Stone himself narrates the last part in Venice in 1867.

This is so much more than the mystery of why John Stone, a happily married man who was frightened of heights, would fall out of his window at the height of his power. We learn of the bribery and wheeling and dealing done by bankers and businessmen, of the banking crisis of 1890, espionage and the early days of shipbuilding and torpedoes, some of which I found fascinating and some of which I found heavy going. There is also a very touching love story at the heart of it all.

It didn't feel like a 600 page book, the words flowed easily and I thought the characters and situations were all very believable, with some twists in the tale!