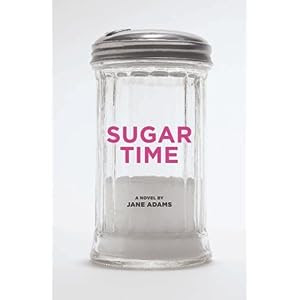 "I was watching a Seinfeld re-run and picking at some leftover kung pao chicken when an octopus curled its tentacles around my midsection and squeezed."

This is how Charlotte 'Sugar' Kane, a wordly-wise (and wise-cracking) New York writer who hasn't had a hit TV show for 20 years, describes the pain of her first angina attack. She is told by her doctor to take it easy and avoid stress, around the same time as her agent tells her that her new story has got the go-ahead for a pilot show. Sugar as 'a woman of a certain age' feels that time is slipping away from her and she really needs this job to pay the bills.

I think this exchange between the doctor and Sugar is one of the funniest in the book.

"Eat lots of fatty foods? Besides the kung pao chicken, that is."
"Hardly ever." Not if you didn't count pizza, pasta alfredo, and Krispy Cremes. "You know, the French, who eat a lot of fat, have fewer heart attacks than the British or Americans." I told him.
"You don't say. Do you drink?"
"Just red wine occasionally, with dinner. Italians, who drink excessive amounts of red wine, also suffer fewer heart attacks than the British or Americans."
"Your point being?"
"You might as well eat and drink what you like. It's speaking English that kills you."

Well, it made me chuckle anyway! A lot of Sugar's dialogue was made up of fast and funny quips like that.

While Sugar tries to ignore her heart condition, she doesn't tell even her closest friends, she moves across the country to the studios in Los Angeles, and gets an even bigger shock when she discovers that her younger assistant is trying to take over her role for herself. She feels that she has to work even harder and longer to justify her position.

She then meets and falls for Alex, a wealthy man who owns a prosperous company ............ and he is also keeping a secret.

This is a book I enjoyed reading, it kept my interest throughout and I could believe in all the characters, especially Sugar, she was likeable and frantic as she knew this was her last chance to make a name for herself in TV and didn't want anyone to take that away from her.

If you like reading about women over 50 then another book I would recommend would be Beachcombing by Maggie Dana.