Book Review: WAR ON THE MARGINS BY LIBBY CONE

WAR ON THE MARGINS BY LIBBY CONE

Drawn from authentic World War II documents, broadcasts and private letters, War on the Margins tells the unforgettable story of the deepening horror of the Nazi regime in Jersey and the extraordinary bravery of those who sought to subvert it.
My Thoughts:

This book was a real eye-opener for me, while I knew that the Germans had occupied the Channel Islands during WWII, I had no idea that life was so difficult for the inhabitants, especially the Jews who lived there. They had to register as a Jew - were not allowed to move house - they had to shop only between the hours of 3-4pm - had to wear the Jewish star - not allowed to visit public places - had to relinquish their businesses. Many depended on the kindness of friends and neighbours for food to survive.

Libby Cone has taken documents, BBC broadcasts and private letters and woven them into a fascinating and very moving story of what life was like during that time. We see how hard life was through the eyes of several people:

Marlene, a young clerk from the Aliens Office who has two Jewish grandparents, but doesn't consider herself Jewish, is hidden in the house of two French stepsisters who become Resistance Fighters and spread propaganda urging the German soldiers to mutiny, risking imprisonment if found. They also had an illegal wireless which enabled them to keep up to date with the happenings of the war via the BBC.

Peter, a Pole who fought in the Spanish Civil War against Franco but was on the losing side and now finds himself deported to the internment camp at Jersey and used as slave labour to help dig the underground hospital. He escapes from the cruel beatings and starvation meted out and is also hidden by brave Islanders.

Everyone was getting thinner; milk and butter were usually only available on the black market. It was more lucrative for the farmers and shopkeepers to sell to the Germans than to their fellow islanders. Some people stole things back from the Germans. There was a brisk traffic of goods from Occupied France to the Islands. Islanders who were caught stealing or selling on the black market took the return route ....... to France, destined for prison at Caen or Lille.

Some people, wanting to settle old scores, sent letters to the authorities grassing on their neighbours, some of the allegations were true, some not.

Some Islanders left food out on their doorsteps for the prisoners from the camp. All were affected by the occupation in some way.

Libby Cone has a simple writing style and says that some of the people in her story were real and some are composites. It left me feeling very moved and wanting to know more about the people and their lives. Marlene was an interesting character, at first she seemed very indecisive and shy but, as the war went on, we saw another more independent side to her as she helped the Resistance Movement by writing 'V' for Victory in chalk around the towns, among other dangerous activities.

On a personal note: I visited Jersey several years ago when I was 19, not really interested in the War at that young age, I was just on holiday to enjoy the beautiful beaches and have a good time. But one thing that sticks out in my mind is visiting the amazing Underground Hospital that the slave labourers dug with just picks and shovels. Now that I'm older and, possibly, wiser this book really brought home to me just what suffering they must have gone through.

There is a wonderful interview with Libby Cone by Rob over at robaroundbooks that I would urge you to read, it's contains some interesting background information and facts.

Also, see here for a biography of Libby Cone and her works.

Special Thanks to Libby Cone for sending me a copy of her book to review.

Also, check out Jules over at Jule's Book Reviews for a fab review of this excellent book.

Another book about the German occupation of the Channel Islands that may be of interest is The Guernsey Literary and Potato Peel Pie Society by Mary Ann Schaffer. 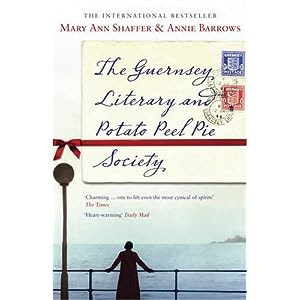