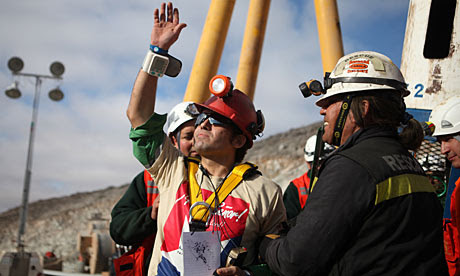 Chile miner Alex Vega waves after being rescued from the collapsed San Jose mine. Photograph: Hugo Infante / Government of Chile / AP
Jonathan Franklin, currently covering the story for the Guardian newspaper in the UK, has already completed early chapters of book for Transworld

The long ordeal of the 33 trapped Chilean miners is finally at an end – and the buzz about book deals and film rights to the men's dramatic story has already begun.

The miners themselves are reported to have made a pact to collaborate on their own book, but in the UK the first book was signed up on Monday, before the rescue had even begun. Freelance journalist Jonathan Franklin, who has covered the dramatic story for the Guardian from day one, is to pen an account of the saga, provisionally titled 33 Men, for publisher Transworld.

Franklin, who is an American but has lived in the Chile's capital Santiago for 15 years, spoke about the book on his mobile phone from Chile, after 48 sleepless hours covering the emotional scenes as the miners emerged.

"This is one of the great rescue stories of all time," he said, admitting he himself had wept as the first miners were released on Tuesday night. "It's the reason we all want to be reporters: a remarkable story of the world coming together for a good reason. It taps into human altruism, the desire to work together, perseverance, faith that good things happen, never giving up." The early chapters of the book, he said, were already written.

As a journalist, Franklin had had "a backstage pass to the whole thing. I was allowed to tape record the psychologist talking to the [trapped] men, I spent last night in the hospital talking to the [newly freed] miners." He intends his book to reveal the characters of the miners themselves ("You could probably do a book on every one of them") and reflect their black humour: one of the men played dead, for a joke, during the first 17 days spent in the collapsed mine without food, while another attempted phone sex with the nurse who was attending to him 700m above.