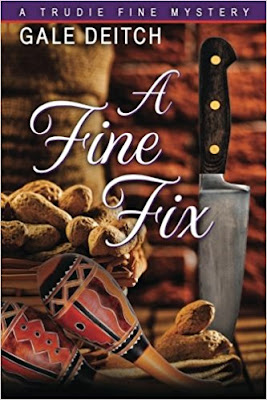 Things couldn't be better for Trudie and her partner, Zachary Cohen. It's the first big job for their catering company, A Fine Fix, and everyone who's anyone in the Washington, DC area will be at the Schwartzes' backyard Mexican fiesta.
With the tables set, the food prepared to perfection, and the Mariachi band sizzling, Trudie is mellow as a Margarita smoothie... ...until a dead body is discovered floating in the pool.
When Zach is arrested as the prime murder suspect, Trudie sets out to clear him and find the real murderer. Life gets spicier than a jalapeno pepper when she realizes she's the focus of three men's affections, including the unnerving detective handling the case.
Soon, however, Trudie is reaching for her favorite knife, but not to chop vegetables.
Recipes included.

A good enjoyable mystery, which makes a change to have a heroine who isn't slim and pretty.  I felt that I could identify with curvy Trudie Fine who just loves her food and loves to cook it!
There are some red herrings in this mystery and some twists that I didn't see coming.
I liked Trudie and her partner, Zach, they worked well together and were a good combination.
There was lots of humour and funny moments.
Trudie moaned that she'd had her share of unrequited love and had never had a boyfriend but I did find it hard to believe that not one, not two, but three very handsome very eligible young men were interested in her and were falling over themselves for her in this story.  This just made the story too unreal for me.
An intriguing mystery overall, and I would be interested to see how this series develops in the future.....preferably without all the love interests!

I received an ecopy of this book from Authors Den in exchange for an honest review.