BOOK REVIEW: THE SWEETNESS AT THE BOTTOM OF THE PIE BY ALAN BRADLEY 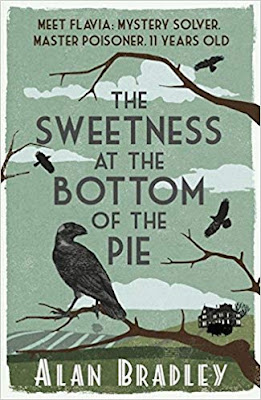 THE SWEETNESS AT THE BOTTOM OF THE PIE BY ALAN BRADLEY

For very-nearly-eleven-year-old Flavia de Luce, the discovery of a dead snipe on the doorstep of Buckshaw, the crumbling de Luce country seat, was a marvellous mystery - especially since this particular snipe had a rather rare stamp neatly impaled on its beak. Soon Flavia discovers something even more shocking in the cucumber patch and it's clear that the snipe was a bird of very ill omen indeed. As the police descend on Buckshaw, Flavia decides it is up to her to piece together the clues and solve the puzzle. Who was the man she heard her father arguing with? What was the snipe doing in England at all? Who or what is the Ulster Avenger? And, most peculiar of all, who took a slice of Mrs Mullet's unspeakable custard pie that had been cooling by the window...?

I absolutely loved this book, it has all the ingredients of a typical English cozy mystery: set in the 1950's, an old crumbling country house in a small village, quirky characters, a mysterious dead body, strange happenings and an amateur sleuth who stumbles upon the clues right under the noses of the local police. Wonderful stuff!

Flavia is a most unusual little girl in some ways; obsessed with chemistry (she has her own lab on the top floor of the old house), she has acute hearing, is old beyond her years, has 2 horrible older sisters who treat her with disdain, and upon whom she likes to conduct experiments without their knowledge!

Her curiosity is first aroused when a dead bird is found on the doorstep and she wonders why her father is so horrified by it, and then a stranger's dead body is found in the cucumber patch, gasping his last words to her, all of which 'sets her mind into a tailspin' and which leads her into danger and excitement by unravelling the clues little by little.

I loved her vivid imagination --


'Fingers of friendship,' he said, whatever that meant.

Fingers of friendship? Had I just been given the secret handshake of some rustic brotherhood that met in moonlit churchyards and hidden copses? Was I now inducted, and would I be expected to take part in unspeakably bloody midnight rituals in the hedgerows? It seemed like an interesting possibility.

Alan Bradley's novel brings perfectly to life an era just after the War when life seemed simpler and slower with his acute observations of people. I laughed, I smiled, I sympathised, I was horrified, I cared about the characters. I was immersed in the story and didn't want it to end.

The 2nd book is called 'The Weed That Strings the Hangman's Bag' which I shall be reading and reviewing shortly.

The 3rd book in the series is called 'A Red Herring Without Mustard' and is published later this year.

Source: Borrowed from the local library