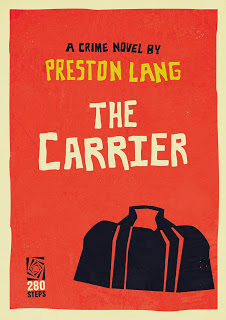 THE CARRIER
BY
PRESTON LANG

About the Book:
A Debut Novel in the vein of Tim Dorsey, Carl Hiaasen and Laurence Shames It’s a bad idea for a drug courier to pick up strange women in roadside bars. Cyril learns this lesson when the girl he brings back to his motel room points a gun at him. But Willow isn’t the only one after the goods that Cyril’s been hired to pick up. A fast talking sex-offender and his oversized neighbor are also on the trail, as is Cyril’s sinister brother, Duane. Willow and Cyril soon form an uneasy alliance based on necessity, lust, and the desire for a quick payday. But with so many dangerous players giving chase, will they nab their package?

The Carrier of the title is Cyril, a young man who is hired to pick up drugs or anything else that his hapless boss Pat, a man who had worn out the meagre connections of this brain, tells him to collect.

Cyril thinks it will be just another job but things do not go according to plan this time.  Little does he know that he is being followed by several others who are also interested in his pick up, including a very sexy young woman with a gun,  Marcus, 'a big stupid-looking guy' who's not as dumb as he looks and Danny, a short Asian, who's recently been in prison for a sex offence.....and there may be others!

The main story centres around the journey and the events of the main characters leading up to the pick up.

This is an excerpt where Cyril's boss is telling him about the jobs:


"There's no reason you should ever get picked up.  It just shouldn't happen.  If you get stopped, take a ticket - that's fine.  If they want to search, tell them to get a warrant.  If they don't have one, do not let them inside the car.  If they bring in the dogs and you get arrested, then just do the time.  If you try to do something else, we'll kill you.  You get that, right?"
"Yes," said Cyril.
"That's something you understand?"
"That is something I understand."


The storyline was quite enjoyable, the writing flowed pretty easily, though I did feel that some of the conversations were a little unrealistic, they just didn't sound normal.

This was quite light-hearted, there is very little swearing, almost no violence, with plenty of quirky characters.

Overall, this was an enjoyable read which kept my interest throughout, I wanted to keep reading to find out what would happen if/when the pick up occurred and how the characters would react.  If Preston Lang writes another book I would definitely like to read it, if he tweaked the conversations to make them sound more realistic!

Preston Lang is a freelance writer, living and working in New York City. The Carrier is his debut novel.

Source:  I received this ebook from Partners in Crime Virtual Book Tours in exchange for a fair and honest review.